How the Nuclear Threat From North Korea Has Grown 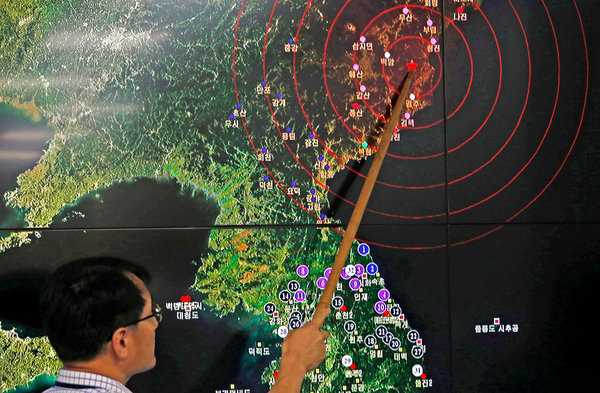 How the Nuclear Threat From North Korea Has Grown

When North Korea tested a missile that fell harmlessly into the sea this month, it was more than just an attempt by its 33-year-old leader, Kim Jong-un, to jolt a new American president.

Arsenal size: small, but thought to be growing

Knowledge of the weapons stockpile is based on estimates. Experts say that North Korea has fewer than 10 nuclear weapons. Satellite imagery of North Korea’s nuclear complex in Yongbyon, combined with official North Korean propaganda photos and recent nuclear tests, suggests that the country could rapidly expand its arsenal. By one estimate, the country now has enough plutonium and highly enriched uranium to build 20 to 25 nuclear weapons.

Explosive power: from one kiloton to 10 kilotons in 10 years

The explosive force of North Korea’s first nuclear device, tested in October 2006, was less than a kiloton, which is 1,000 tons of TNT. Its second test, in 2008, had more than double that force.

By January 2016, the country claimed to have exploded a hydrogen bomb in a fourth test, but outside monitors expressed skepticism. Seismic readings suggested an explosive force of four to six kilotons.

Seismic readings of North Korea’s fifth test, in September 2016, however, registered a force of approximately 10 kilotons, according to South Korea’s Defense Ministry.

In 1999, George J. Tenet, then director of the Central Intelligence Agency,said he could hardly overstate his concern about North Korea’s program, warning that the Taepodong-1 missile, with a reach of up to 1,243 miles, could deliver bomb payloads to Alaska and Hawaii.

In the nearly two decades since, the country’s investment in becoming a nuclear weapons power has succeeded despite diplomacy and international sanctions. In 2016, Mr. Kimlaunched dozens of missiles for tests and as shows of military might. Some missiles could be launched from mobile pads and submarines, making them easier to hide. They could potentially carry nuclear warheads, according to Siegfried S. Hecker, emeritus director of the Los Alamos National Laboratory in New Mexico, birthplace of the atomic bomb.

He and other analysts have said they assume North Korea has designed and demonstrated nuclear warheads that can be mounted on short-range and perhaps medium-range missiles. Writing in September 2016, Dr. Hecker said, “Pyongyang will likely develop the capability to reach the continental United States with a nuclear tipped missile in a decade or so.”

When he became North Korea’s top leader in April 2012, Mr. Kim said that his “first, second and third” priorities were to strengthen the military, and he declared that superiority in military technology was “no longer monopolized by imperialists.”Less than three years later, Gen. Curtis M. Scaparrotti, then commander of United States forces in South Korea, said he believed that North Korea had made a nuclear weapon small enough to fit atop a missile.

In May 2015, Mr. Kim said North Korea had the ability to miniaturize nuclear weapons. That claim was greeted with skepticism by analysts, but in March 2016 Mr. Kim was photographed admiring what state media described as a home-built warhead. In August 2016 North Korea test-fired a ballistic missile from a submarine, demonstrating a significant improvement in its ability to strike enemies stealthily.

The missile test this month, analysts said, further proved that North Korea was committed to producing more lethal systems that could be deployed quickly.   “The North Koreans are sincerely paranoid,” said Joshua Pollack, a senior research associate at the Middlebury Institute’s James Martin Center for Nonproliferation Studies. “They’re increasingly very blunt about how they would use these things preemptively.”