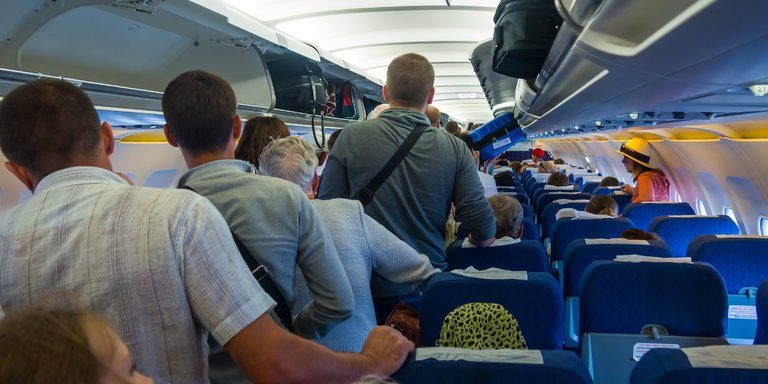 How likely is it that you will catch the flu on a fully packed airplane during flu season?

According to a new study, not very likely.

But a lot depends on who else is sitting in your row, and the row in front and in back of you. It also depends on whether you use the airplane’s bathroom, what you touch and how carefully you wash your hands.

Flu is most commonly transmitted by small respiratory droplets that move through the air when an infected person sneezes, coughs or talks. The droplets don’t go especially far — typically six feet or so — and they don’t become suspended in an aerosol that travels through currents of air in the plane’s cabin, where they could be breathed in. The flu virus can also be picked up from something an infected person touched.

For the study, the research team took five round-trip flights from Atlanta to West Coast cities, four of them during the flu season. Each of the flights had 14 researchers aboard to observe the other passengers and crew. In all, they recorded the movements of 1,540 passengers and 41 crew members. Only one passenger on one flight was seen coughing.

They sat in the economy class cabin of single-aisle airplanes, most of them Boeing 757s. The flights lasted between three and a half and five hours, and most had no unoccupied seats.

The study, in the Proceedings of the National Academy of Sciences, found that 38 percent of people never left their seats and 38 percent got up just once. The rest left two or more times. Only 43 percent of people sitting by the window got up, but 62 percent of middle seat occupants and 80 percent of those on the aisle got up at least once.

While it may seem that there is always a line for the restroom when you need one, only a third of passengers used the facilities even once, and half never used them at all. Here’s a tip: In a Boeing 757 economy-class cabin, there is only one toilet at the front of the cabin, but two at the back. The wait for using the lavatory at the front was 3.1 minutes, but those who went to the back spent only 1.7 minutes on the queue.

In a fully booked plane, everyone is sitting next to someone most of the time, but the researchers found that 84 percent of passengers also had close contact, for an average of 24 seconds each, with someone beyond a one-meter radius of their own seat, either other passengers or the crew.

How much contact passengers had with their fellow travelers varied by seat position. Those seated at the aisle averaged 64 contacts, the middle seat 58 and the window only 12. People sitting in the middle of the cabin had more contacts than those sitting in the front or back.

Using the data they collected, and estimating one meter as the distance required for direct transmission of the flu virus given the layout of the plane, the researchers constructed 1,000 simulated flights based on two situations: a person with the flu sitting in seat 14C (an aisle seat near the middle of the cabin) and a flight with an infected crew member.

They calculate that the 14 people sitting closest to 14C — in the same row and one row in front and behind on either side of the aisle — have the highest likelihood of being infected. Throughout the plane, people sitting in aisle seats are more at risk. But the risk declines quickly with distance — a person sitting in the window seat in row 16 has almost zero likelihood of catching anything from 14C, barring some kind of direct contact.

“It’s pretty clear that if you’re seated more than a meter away from an infected passenger and you’re careful with hand hygiene, you’re unlikely to get infected with the flu,” said one of the authors, Howard Weiss, a professor of mathematics at the Georgia Institute of Technology. Other research suggests wearing a face mask, if you’re inclined to wear one, may also help.

The team also collected samples from airplane surfaces before and after passengers boarded, and found that airplanes are pretty clean. Of 229 samples collected, not a single one showed any evidence of any of 18 common respiratory viruses.

The lead author, Vicki Stover Hertzberg, a professor of nursing at Emory University, had some advice for people who fly when they have the flu. “Sneeze into your elbow, use good hand hygiene, and turn on your air vent. That will send the droplets straight to the floor.”