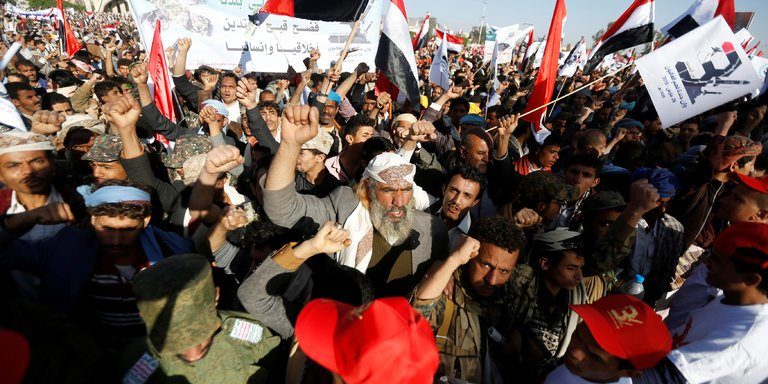 AL MUKALLA, Yemen — Houthi rebels in Yemen hit a Saudi Arabian oil tanker with a missile on Tuesday, an attack that could escalate the three-year-old conflict even as the leader of the United Nations expressed optimism about renewed diplomacy to end it.

In a statement carried on Al Mayadeen television in Yemen, the Houthis said the missile strike avenged the Yemeni civilians killed Monday in a Saudi aerial assault on Al Hudaydah, the only Yemeni seaport controlled by the rebels. At least 14 people, including children, were killed after they ventured outside their residential building to get some fresh air in the stifling midmorning heat, witnesses said.

The Saudi-led military coalition, which has been bombing the Houthis and their allies since March 2015, has said its attack on Al Hudaydah struck military targets.

The Houthis have no air force. But they have enraged the Saudis by repeatedly firing missiles into Saudi Arabia, most notably a seven-missile barrage launched late last month. The Saudis claim that the weapons are supplied by Iran, Saudi Arabia’s regional rival. Iran denies it.

Saudi Arabia confirmed that the oil tanker, which was not identified by name, was attacked by the “Iran-backed Houthis” in the early afternoon.

The tanker was in international waters west of Al Hudaydah, according to a statement by the Saudi coalition spokesman, Col. Turki al-Malki. He did not disclose the extent of the damage but called the assault “a serious threat to the maritime navigation and international trade” in the region.

The spokesman also said a Saudi-coalition warship had escorted the tanker from the area, but he hinted that the stricken vessel might be leaking fuel, saying the attack created the risk of “environmental and economical damage.”

The Houthis control nearly 200 miles of Yemen’s Red Sea coastline, which includes Al Hudaydah, a critical entry point for humanitarian aid. The Saudis have severely limited shipping traffic to the port during the conflict.

There were fears that the missile strike on Tuesday could lead to a tighter Saudi clampdown on Al Hudaydah’s port.

The escalation came against the backdrop of an intense fund-raising effort by the United Nations to help civilians in Yemen, which the organization has called the world’s worst man-made humanitarian disaster.

Secretary General António Guterres of the United Nations, who attended a donor conference for Yemen relief in Geneva on Tuesday, said that more than $2 billion had been raised — about half from Saudi Arabia.

Asked at a news conference if he saw a contradiction in aid money donated by a country “to repair what it is destroying,” Mr. Guterres sought to answer diplomatically.

“Well, we all know that there is a war, we all know who are the parties to the war, but the two things need to be seen separately,” he told reporters.

Mr. Guterres also said his special envoy for the Yemen conflict, Martin Griffiths, who recently visited Saudi Arabia and Yemen, had come away “very encouraged” and was now visiting other countries in the region in hopes of establishing a dialogue for talks. “I am optimistic about that possibility,” he said.