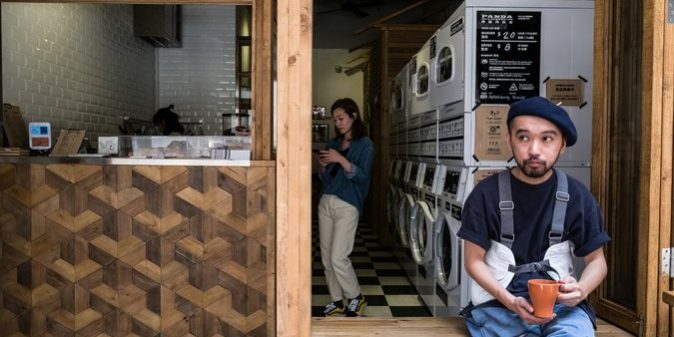 HONG KONG — On a bustling Hong Kong street lined with dried seafood stores, where baskets of sea cucumber vie for space with scallops and abalone, one shop stands out. Amid the pungent smells of dried fish and shrimp, the scents of brewed coffee and freshly laundered clothes come wafting out of the aptly named Coffee & Laundry.

The shop — half laundromat and half cafe — offers customers a variety of drinks and pastries along with 10 self-service washing machines and dryers.

Washing their own clothes at a laundromat is a new experience for Hong Kong residents. The first self-service laundromat is believed to have opened only in 2014. Since then, the number has taken off; more than 180 laundromats had appeared by the beginning of this year, according to one estimate.

Why this proliferation of laundromats? The reason is Hong Kong’s increasingly acute shortage of affordable housing. As prices keep soaring in what is already the world’s most expensive property market, residents have been forced to squeeze into ever smaller apartments, leaving little room for washers and dryers.

The average size of a newly constructed apartment in 2017 was 354 square feet, according to the city’s building department, down from 420 square feet in 2013. And the units are only getting tinier: Thousands of so-called micro-apartments, smaller than 200 square feet, are expected to be built by 2020, according to JLL, a global real estate services firm.

“This is an industry created by Hong Kong’s housing issues,” said Katol Lo, one of Coffee & Laundry’s founders. “Even if there’s space for a washer, where would people dry their clothes?”

For a long time, the answer was high above Hong Kong’s bustling city streets. Laundry hung out to dry on poles sticking out from the sides of buildings was so ubiquitous that it was jokingly called Hong Kong’s “national flag.”

That began to change in the 1980s, when washing machines and dryers became affordable as Hong Kong got wealthier, buoyed by the opening up of China’s economy and the city’s establishment as a major financial center.

Walk around Hong Kong’s public housing blocks and old tenement buildings today, and it quickly becomes clear that many residents still hang their clothes outside to dry. But rising incomes have allowed much of Hong Kong’s population to move into sleek, glass apartment towers, without all the visible hanging laundry.

Now, as housing prices grow ever more expensive per square foot, the challenge is no longer affording the washing and drying machines themselves, but finding the space to put them.

One result was a surge in demand for drop-off service at commercial laundries, which have long been common in Hong Kong. That led to such a backlog at some laundries that some customers faced days-long waits just to get their clothes back.

On a recent evening after work, Michael Bolger, 27, sat reading a dog-eared book while waiting for his clothes at Coffee & Laundry.

Mr. Bolger, a native of Ireland who works at a bitcoin exchange, said that when he first moved to Hong Kong in 2016, his flat was too small to fit a dryer, and the humidity prevented his clothes from drying properly on a line. For a while he used a drop-off laundry, but his clothes would sometimes come back with tears and stains.

“It’s nice to just sit and read in a place that’s not your apartment,” he said of Coffee & Laundry. “It’s kind of therapeutic, sitting here and watching the washing machines.”

Not far from Coffee & Laundry is a branch of LaundrYup, a local chain of self-service laundromats. The shop, steps away from a street full of antique stores, is tiny and strictly functional, with shiny white floor tiles, bright fluorescent lights and a single red bench. Instead of a cafe, there are lockers rented out to SF Express, a logistics company sometimes referred to as China’s FedEx.

Patten Mak, the chain’s operations manager, said the combination of high demand and low maintenance and labor costs made it possible for even a tiny laundromat to earn the equivalent of thousands of dollars per month, enough to entice several new laundromat chains to enter the market.

Across the harbor, in the working-class neighborhood of Tai Kok Tsui, a woman tapped away at a game of mah-jongg on her phone while waiting for her sheets to dry at a branch of Water Laundry, another local chain. Nearly every inch of the wall in the small laundromat was covered with machines.

“Us working class, we don’t have the money to buy a washing machine, and there’s no space to dry clothes at home,” said the 40-year-old housewife, who gave her name as Ms. Lo. She said she lived in a cramped 90-square-foot subdivided flat with her husband.

“This is an economic problem,” she said. “You wouldn’t use this kind of laundromat if you have money.”

The spread of laundromats has begun to alter the social fabric of the city as laundry, which was once conducted in private, has been forced into the public realm, said Jianxiang Huang, a professor in the Department of Urban Planning and Design at the University of Hong Kong.

That is exactly the goal of Mr. Lo, the co-founder of Coffee & Laundry, who said he wanted his shop to be as much a neighborhood hangout as a place to wash clothes. To this end, he has put tables on the sidewalk and scheduled events like an exhibition of a local comic book artist.

On a recent evening, there was a steady trickle of customers going in and out of Coffee & Laundry. Some milled around in slippers and pajama pants, counting down the last few minutes of the dryer cycle. Others said they had come for the coffee and ambience.

“Now in Hong Kong, people aren’t always very neighborly,” Mr. Lo said. Since opening Coffee & Laundry, however, “I’ve gotten to know my neighbors and the owners of dried seafood shops nearby,” he said.