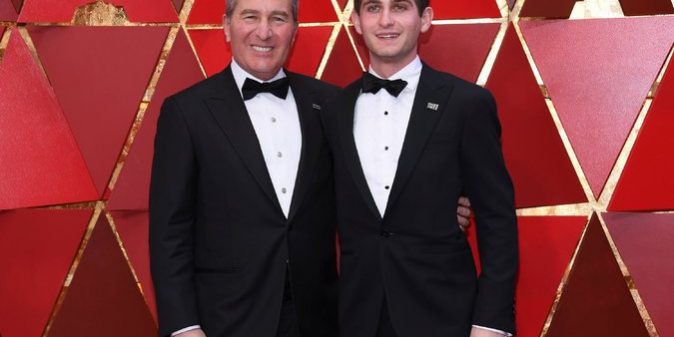 LOS ANGELES — Charles H. Rivkin began his Hollywood career in 1988, when Jim Henson hired him to plot a business future for Kermit the Frog.

A hairpin turn into politics awaited. Mr. Rivkin — polished, almost preternaturally so — became a mega-fund-raiser for the soon-to-be-president, Barack Obama, who named him ambassador to France in 2009. After a celebrated run in Paris, where he was the youngest American envoy since the Eisenhower administration, Mr. Rivkin became an assistant secretary of state.

And now Mr. Rivkin, 55, finds himself trying to meld both of those lives — Hollywood insider and Washington influencer — as chairman of the musty Motion Picture Association of America, which runs the byzantine movie rating system and lobbies around the world for the six old-line Hollywood studios (20th Century Fox, Universal, Warner Bros., Disney, Sony and Paramount). He officially took over the organization on Jan. 1, replacing Christopher J. Dodd, the longtime Democratic senator of Connecticut.

Depending on your perspective — and whether you see opportunity in upheaval — Mr. Rivkin’s timing either is perfect or couldn’t be worse.

There is little doubt about his point of view. Over dinner with a reporter at Bouchon Beverly Hills, he was in such a good mood about returning to moviedom that he broke into song as Gonzo, rasping out a couple of lines from “I’m Going to Go Back There Someday,” a song from “The Muppet Movie.” Mr. Rivkin then merrily downed an oyster, pinkie in the air, and called his new position “possibly the best job in the world.”

But Hollywood has changed immensely in the time he has been away.

Attendance at theaters in the United States and Canada dropped 6 percent in 2017, hitting a 22-year low. At the same time, studios are more reliant than ever on the box office. Squeezed by the rise of subscription streaming services like Netflix, the six major studios reported an 18 percent drop in home-video rental and sales revenue, including video-on-demand purchases, in the fourth quarter of 2017, compared with the same period a year earlier.

Digital TV Research, a British media consultancy, estimated in October that piracy would cost the global movie and television business $37.4 billion in lost revenue this year, an 18 percent increase from 2017. Losses in 2022 were estimated to reach $51.6 billion.

To cope with these challenges and others, Hollywood is consolidating. Disney will soon absorb Fox. AT&T is fighting the Justice Department in court for the right to acquire Time Warner, which owns Warner Bros. As Amazon, Netflix and even Apple pour resources into original content, more consolidation is expected.

Mergers could lead to budget cuts for the nonprofit Motion Picture Association. Under the current setup, the six member studios chip in more than $16 million apiece annually to fund the association’s global operations, according to tax filings.

The organization, which endured a 20 percent budget cut in 2009 as the studios dealt with the Great Recession, also faces challenges in Washington. Its influence has diminished over the past decade: Silicon Valley stars reign supreme now.

“I do not think we have punched our weight in terms of influence — the power that we should have, given the jobs we support,” said Jeff Shell, chairman of the Universal Filmed Entertainment Group, which includes Universal Pictures, DreamWorks Animation and Focus Features. Mr. Shell added that the M.P.A.A. is “a big, complicated organization and needs an executive to go in and rethink every part as a business — what should be invested in and grown, what should be scaled back.”

And Mr. Rivkin, who hails from a storied Democratic family (his godfather, former Vice President Hubert H. Humphrey, wrote a note on a napkin to excuse him from school so that he could attend the party’s 1968 national convention), inherits the M.P.A.A. during a culture war. Hollywood personalities — Meryl Streep, Jimmy Kimmel, Kathy Griffin, among others — have attacked President Trump, and he has been happy to return fire.

Many studio executives, while publicly silent, privately worry that Mr. Trump’s position on trade, in particular his aggressive stance toward China, will hurt their profitability. China is fast eclipsing North America as the world’s No. 1 movie market, and studios have been trying to persuade the Chinese government to relax restrictions on film imports.

The Office of the United States Trade Representative is leading those negotiations, but Mr. Rivkin also plays a role. As the association’s chief, he is effectively Hollywood’s global ambassador and its chief Washington crusader. (He does not, however, plan to register as a lobbyist; for that role, Mr. Rivkin hired Gail MacKinnon, a former Time Warner executive who started her career working for Republican lawmakers.)

Mr. Rivkin acknowledged that the organization faces challenges big and small, including questions about its identity and its structure. Netflix plans to release 80 original movies this year. But it is not a member. Should it be?

But he spoke about solutions with a confidence that felt genuine, calling the association “a dust-covered diamond that can easily shine again.”

He then began an impassioned recitation of industry data. Did you know, for instance, that more Americans go to the movies than attend professional football, basketball, baseball and hockey games combined? Mr. Rivkin also spoke excitedly about plans, some already in motion, to increase the trade organization’s profile, including improved branding, more star-studded events in Washington and livelier social media feeds.

“Reinvigorated at every level,” he said of the association.

At the same time, Mr. Rivkin aggressively disputed the notion that Mr. Trump and Hollywood are on opposite sides.

“President Trump probably knows this industry better than any president since Reagan,” Mr. Rivkin said. “I think he understands that entertainment is important both as an economic force — jobs in every single state — and as a projection of American values. It’s our soft power. It’s showing the world what America is capable of.”

The film and television industries support 2.1 million jobs in the United States, contribute $134 billion to the economy and account for $16.5 billion in exports, according to Motion Picture Association data.

Hollywood has struggled to cast the right person as its cheerleader in chief since 2004, when Jack Valenti retired after 38 years. Mr. Valenti, who worked in the White House under Lyndon B. Johnson, was larger than life. He picked fights, lionized the studio chiefs he represented and fended off lawmakers’ attempts to limit sex and violence on screen by devising the self-regulating film ratings system.

Mr. Valenti was followed by an entertainment outsider, Dan Glickman, secretary of agriculture during the Clinton administration. Mr. Glickman, affable but low key, scored victories, including securing $400 million in government production incentives. But Hollywood never accepted him as one of its own. He left in 2010.

Mr. Dodd took over the next year. While making inroads on piracy, he also struggled at times to persuade the six studios to speak with one clear voice on crucial industry matters, including the 2014 cyberattack on Sony Pictures. Michael Lynton, then Sony’s chief, was so furious over the organization’s lack of public support during the early days of that crisis that he almost canceled Sony’s membership.

Herding studio chiefs is harder than it used to be. In Mr. Valenti’s era, the film factories were stand-alone entities whose interests were in lock step. Today, the studios are owned by sprawling conglomerates, which employ their own lobbyists and often have competing interests.

Mr. Rivkin, who has been married to the businesswoman Susan Tolson for 28 years (they have two children), has deep political relationships, some of which involve family. His father, William R. Rivkin, who was close to the Kennedys, served as ambassador to Luxembourg, Senegal and Gambia. His brother, Robert, is Chicago’s deputy mayor. Mr. Rivkin worked at the State Department under John Kerry, a close friend.

At the same time, unlike his two most recent predecessors, Mr. Rivkin knows Hollywood. At the Henson Company, he forged agreements with partners like Sony and Disney. After the Henson Company was sold, he led another boutique studio, WildBrain, where he oversaw production of the hit Nickelodeon series “Yo Gabba Gabba!”

One of Mr. Rivkin’s cousins, the Democratic fund-raiser and education advocate Jamie Alter Lynton, is married to Mr. Lynton, the former Sony chief.

Despite moving in rather grand circles, Mr. Rivkin does not wear his ego on his sleeve, say people who know him well. “Charlie was always the Dudley Do-Right of the kids’ business,” said Brown Johnson, Nickelodeon’s former president of animation, referring to the heroic “Rocky and Bullwinkle Show” character. “So honest. So respectful. A listener.”

Brian Henson, chairman of the Henson Company and Jim Henson’s son, agreed — with a twist.

“I think that putting his ego aside actually is part of his ego,” he said. “Charlie wants to be the guy who makes things happen for others.”