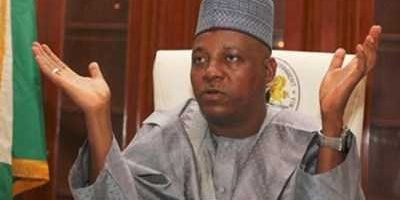 Some unknown gunmen suspected to be members of the islamist sect Boko Haram today kidnapped elder statesman Alhaji Shettima Ali Monguno this afternoon at the Mafoni Jumaat Mosque immediately after he performed the Friday Jumaat prayers.

SHETTIMA ALI MONGUNO Commander of the Federal Republic or C.F.R. for short is according to Wikipedia a Nigerian educationalist and Politician, Born 1926 in Monguno-Bono state. He attended Monguno primary school, on completion he proceed to Teacher’s College Bauchi and Katsina, college of arts, science and technology Zaria, Moray House college of education and university of Edinburgh.

He was M.P. in 1959, education secretary and councilor for education, works and social welfare Borno, local Government 1959-65. He was Nigeria Federal Minister for Air Force and Internal Affairs1965-66, Federal Commissioner for Trade and Industries 1967-71. He also served as Minister for Mines and Power, Petroleum and energy 1972-75.
He is also leader of Nigerian delegation to UNCAD II New Delhi in 1968 and member Nigerian delegation to United Nations for over 10 years. He received keys to the cities of New York, Louisville, Kentucky, USA; Quito, Ecuador; and Lima, Peru.

The kidnappers forced the 87-year old into their car and sped off after shooting into the air to scare away worshippers at the mosque.

Most residents are angered by this incident as they pray for his safe release by his abductors and pray for Almighty Allah to punish those indulging in such heinous acts and bring an end to their atrocities.

His son Rahma Monguno has confirmed the incident. Rahma told Saharareporters by phone that the kidnappers have made contact with the family, but he said they are not asking for money but the release of some of their members detained by the government.

Last week the JTF in Maiduguri had revealed that dreaded sect has changed tactics and was beginning to engage in kidnapping. Two weeks ago, the sect made $3.5 million from kidnapping a French family in Cameroon.