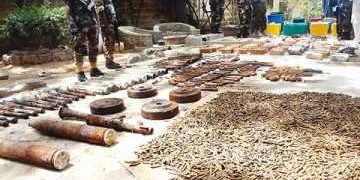 BY ABDULSALAM MUHAMMAD
KANO —  Acting Lebanese Consul in Kano, Khallel Musliman, has revealed that the private residence that housed cache of weapons of mass destruction linked to international terrorist organisation, Hezbollah, belongs to a Sierra Leonean.
Speaking in Kano, Musliman said the property owner who is already in custody over his infamous role in the arm saga is Abdu Hassan Tahir.

The controversial property located at Gaya Road within Bompai GRA is within a striking distance to the police headquarters that was sacked by the dreaded Boko Haram members in January 20, 2012.
Heavily armed soldiers are still keeping vigil on the property thereby impeding access to the popular street off Milar Road in Kano metropolis.
The Lebanese consul who made available to Vanguard a copy of business permit granted by the Ministry of Internal Affairs in 2004 to the accused to conduct business activity in Nigeria further revealed that he is a nationalised Sierra Leonean.
The Brigade Commander, 3rd Motorized Brigade, Nigerian Army, Kano, Brigadier-General Ilyasu Abbah, had named three suspects in their custody as Abdallah Hassan Fadallah, Mustapher Fawaz and Abdullahi Tigani, adding that they have all been moved to Abuja for further investigations.
The army chief recalled that one of the suspects, Tahini, was once arrested at the Mallam Aminu Kano International Airport over undeclared $60,000 on his way to Lebanon, adding that he is an Abuja-based businessman.
A copy of the business permit ref number MIA/B 24332/T/403 and signed by one Alhassan M.Fawu for the Director Citizenship and Business for the Minister of Internal Affairs, Abuja,  in 2004 allows the suspect to establish a business venture in Kano.
The Sierra Leonean  suspect had obtained the business permit with a registered company named, Amfat Nigeria Limited, that specialized in manufacture  of plastic products, general merchants, importer and exporter.
The Lebanese Consul was quick to differentiate the Sierra Leonean suspect from Taheer  Fadhlala, owner of Taheer Guest Palace in Kano, adding that the clarification becomes imperative in the light of misrepresentation in some media.