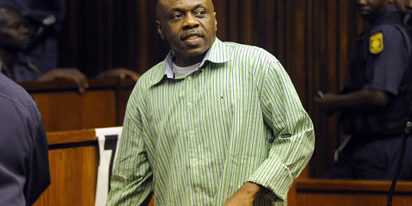 Spokesman for South Africa’s Department of Correctional Services, Manelisi Wolela, who confirmed the botched effort told reporters: “I can confirm that Okah is one of the five inmates that attempted to escape and whose efforts were foiled.”

He did not give details of the attempted escape from Leeukop Prison in Northern Johannesburg that is said to have taken place last month.

Okah was convicted last year and sentenced on a 13-count charge of terrorism, including twin bombings that killed 12 people in Abuja during the country’s 50th Independence anniversary in 2010.

He was arrested, tried and convicted in South Africa where he has permanent residency.
The department said most of the offenders involved in the botched escape bid were serving life sentences for serious offences, including murder, kidnapping and robbery.

Correctional services officials, however, said security at the prison, which recorded 11 attempted jail breaks in the 12 months until March, last year, had been tightened.

Judge Neels Claaseen, last year, sentenced Okah to 24 years in prison having found him guilty in the 13-count charge of acts of terrorism.

The judge stated that the struggle of the Movement for the Emancipation of Niger Delta (MEND), “is politically motivated and as a result a maximum sentence for Okah will be inappropriate.”

He said South Africa, being a signatory to the UN Treaty on Terrorism Acts allowed the convict to be tried in South Africa though the events took place in Nigeria.

“As a signatory, South Africa is duty-bound to adopt the treaty and incorporate it into the laws of South Africa, in other words domicile the treaty,” Mr. Claaseen said.

He asserted it was the responsibility of the court in sentencing the convict to take into account the feelings of the world community and to make South Africa unpalatable for terrorists to operate within the jurisdiction as member of the community of nations.

Mr. Claaseen said all the 13 counts Mr. Okah was convicted of were related to three events:

“The first event was the March 15, 2010 bomb attack, where two car bombs occurred at the venue of a political gathering which was being attended by the Delta State Governor in Warri, Delta State, where one person died and several others were injured.

“The second event occurred on October 1, 2010, in Abuja, where two car bombs exploded, killing eight people with several others injured.

“Third event is the threat to the Nigerian government.

He said these acts were very serious crimes which must be punished in accordance with the terrorism laws.