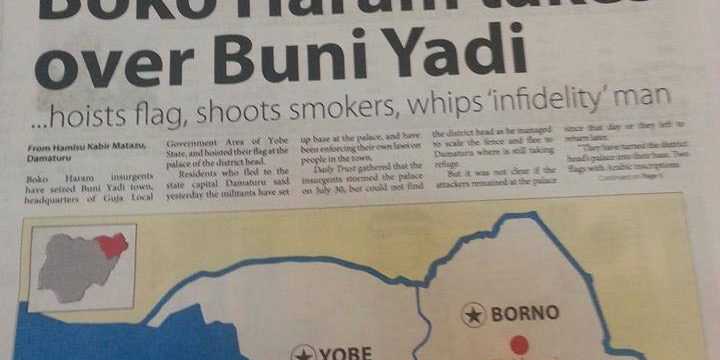 Boko Haram insurgents have seized Buni Yadi town, headquarters of Guja Local Government Area of Yobe State, and hoisted their flag at the palace of the district head.

Residents who fled to the state capital Damaturu said yesterday the militants have set up base at the palace, and have been enforcing their own laws on people in the town.

Daily Trust gathered that the insurgents stormed the palace on July 30, but could not find the district head as he managed to scale the fence and flee to Damaturu where is still taking refuge.

But it was not clear if the attackers remained at the palace since that day or they left to return later.

“They have turned the district head’s palace into their base. Two flags with Arabic inscriptions were hoisted at the entrance, and armed militants stood guard, while many of them sleep inside,” a man who does not want to be named told Daily Trust.

A resident who fled following the Boko Haram takeover said militants have started enforcing their own laws for days now.

“They shot two people dead over cigarette smoking, and another man was beaten 80 lashes for living with a woman who was said not to be his wife,” he said.

Insurgents are moving freely on motorbikes, and manning security check points around the Buni Yadi, the man added.

Another resident said the insurgents came to his house to preach, and also asked why he still remained in the town.

He said, “Three insurgent groups came to interview me, asking almost similar questions, ‘why do you prepare to stay in Yadi? Are you with your family?’”

He said the following morning his family advised him to leave the town immediately while other family members would follow him later.

The takeover of Buni Yadi is coming two weeks after militants overrun Gwoza in neighbouring Borno State. Efforts by troops to take the town back have failed so far, according to reports.

Before Gwoza, Boko Haram men had taken Damboa, also in Borno, but control of the town was later reclaimed by soldiers.

Buni Yadi had seen repeated insurgency raids, including the deadly attack on the Federal Government College in which dozens of students were killed in February.

An attack on the military and police bases there on May 27 left 18 soldiers and 15 policemen dead. Less than two weeks earlier, Boko Haram gunmen stormed the town and abducted a traditional ruler and a local chemist.

Daily Trust reports that security operatives have abandoned their bases in Buni Yadi and neighbouring areas weeks ago, following Boko Haram attacks in which they destroyed the only bridge linking southern Yobe to Damaturu.

Many people in the area express fears of looming food shortage due to inability of farmers to cultivate this season.

Residents of Bara, the headquarters of Gulani Local Government Area, said also that insurgents have taken over town and other neigbhouring towns including Bularafa but details were not immediately available.