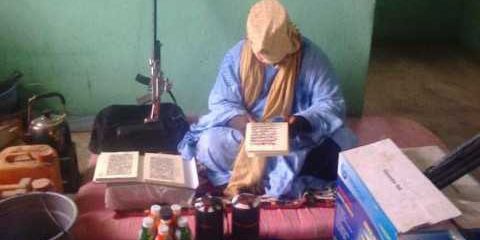 “This is a rebuttal from the information dissemination and sensitization unit of the Jamaatul Ahlil Sunna Lidawati Wal Jihad (Boko Haram) on the series of lies that the Nigeria military have been feeding the world on our recent conquests. Let the whole world know that we are on the path of victory because up to

this minute, the town of Bama is under our control,  the whole of Minchika is now in our hands, as well as Manalapan (Junction of)  Mubi is now fully under our control.  We are assuring the world that this would be continuous and there will be no going back by God’s grace. This is a message from me Abu Zinnira, on behalf of our brethren” – stated a boko haram character who goes by the name Abu Zinnira over the telephone that lasted 29 seconds. He made the remarks from a private phone line yesterday evening.

Abu Zinnira had been the voice of the Jihadist group before going into a two year silence. The said character was said to have headed the information and sensitization of Boko Haram. He took over from Abu Qaqa after Abu’s capture by the Nigerian security agents.

The latest press release by the Jihadist group puts a new mask of shame over the efforts of the Nigerian military who had tried to retake the aforementioned towns. The Nigerian military, after having lost the initial battle to the Islamic group – had regrouped and launched a multipronged attack through the air and by land. The initial reports from the defense headquarters painted a hopeful picture that victory was near. But the recent release by the terrorist group reveals that the victory remains elusive, and may remain elusive for some time.

Meanwhile, a competent source within the Nigerian security structure points to a fast degrading moral structure within the forces deployed at the area of activity. The source reveals that a slow but steady desertion of positions by Nigeria military men have been observed by the command structure – and it “has become a problem they cannot wish away”. The source indicates that it has become apparent none within the Nigeria armed forces is willing to take up positions in the troubled regions.  “The explains why our boys are not fighting”.