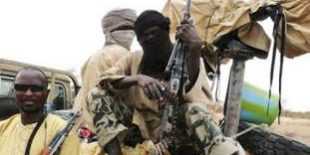 The insurgents were said to have invaded   Shaffa and Tesan Aledeh which are predominantly Christian communities on Wednesday evening.

Before they left unchallenged, they   vowed to return if their ultimatum was not met, and killed two retired army officers and an ex-policeman.

The insurgents were said to have killed one of the   former   officers     in Tesan Aledeh   before leaving for the nearby Shaffa   where they took the lives of the second retired   officer and the ex- policeman.

A source, who disclosed this to one of our correspondents on Thursday, said the developments caused fears among Christian communities along the Biu-Hawul-Garkida-Mubi Road.

He said, “There is widespread fear of possible attacks by the insurgents   among Christians in communities along this important road. People are worried that at the end of the ultimatum, the Boko Haram may also attack them.

“They killed a retired police officer in Tasan Aledeh and warned the people of the community     to convert to Islam within 24 hours.

“The people   are now panicking because they are really helpless. First, there is no concentration of soldiers there. The soldiers only come in the afternoon and after patrolling for the day, they go back.

“Another thing is that there is no civilian JTF in the area. The people did not form the Civilian JTF because they were warned not to do so to avoid attracting the attention of the insurgents. Now they are harassing them.

“The Boko Haram members are openly addressing people in Shaffa and other Hawul communities. And because of the killing of the three ex-service men,   many people are relocating.”

The PUNCH learnt on Thursday that the insurgents had on Saturday burnt many houses and churches in Debiro,   Biu Local Government Area   in   Borno State.

Among the churches allegedly burnt were the EYN and the ECWA worship centres The residence of the Pastor of the Deeper Life Bible Church was also said to have been affected.

Many residents, including   a former Commander of the Joint Task Force in the Niger Delta, Maj. Gen. B.A Debiro, were said to have been displaced.

A source   said   the insurgents stormed the community in two hilux vans and 20 motorcyles .

They were said to have headed straight for the residence of the District Head, Lawan   Thlama, where they ordered that five young men should take them round to identify the residences of   Christians in the community.

It was gathered that when information reached the Christians,  they   fled into the bush for safety.

However, another source said that five   insurgents were arrested at Tafawa in Balewa LGA of Bauchi State and in Jalingo, Taraba State.