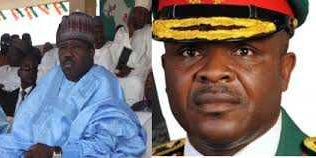 Former Borno State Governor Ali Modu Sheriff, former Chief of Army Staff Lt.-Gen. Azubuike  Ihejirika and others should face trial at the International Criminal Court (ICC) – if the opposition All Progressives Congress (APC) has its way.
APC advised President Goodluck Jonathan  yesterday to hand over the duo and others for alleged sponsorship of Boko Haram, the fiendish sect that is waging a war to establish an Islamic Caliphate in some parts of the North.