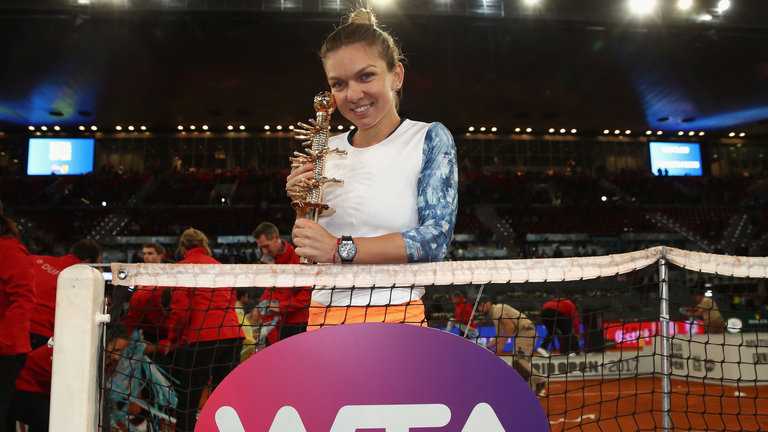 Simona Halep has won back-to-back titles at the Madrid Open after beating Kristina Mladenovic 7-5 6-7 (5-7) 6-2 in a hard-fought final.

The third-seeded Romanian was made to work really hard by her in-form opponent but eventually triumphed after almost three hours on court.

Mladenovic served for the first set at 5-4 but Halep responded, reeling off three games in a row to edge a tight opener.

The second was equally high quality and, having done well to stay with Halep, Mladenovic bravely won the tie-break 7-5 to ensure the match went the distance.

Meanwhile, a frustrated Halep was given a code violation for kicking her racket in frustration in the direction of a ball boy when she was 30-0 down in the 12th game of the second set.

But the Frenchwoman began to tire in the decider and Halep pulled clear in the closing stages, before serving the match out to love and claiming the 15th title of her career.

The 25-year-old is in fine form ahead of the French Open, which starts towards the end of the month, and she will climb to number four in the world when the rankings are released.

And 14th seed Mladenovic emerged with plenty of credit after reaching her first final at premier mandatory level, the grade immediately below grand slam tournaments.

Simona Halep thanked much-criticised Romanian Fed Cup coach Ilie Nastase after defending her title, but the 70-year-old’s role in the trophy presentation was labelled “irresponsible and unacceptable” by the WTA.

Halep was congratulated on court by Nastase as the Romanian received the trophy named after Nastase’s former doubles partner and Madrid Open owner Ion Tiriac.

But Nastase has been banned from the French Open and Wimbledon after he was ejected from Romania’s Fed Cup clash with Great Britain last month for a series of foul-mouthed rants directed at British captain Anne Keothavong and number one Johanna Konta, as well as umpires and members of the press.

“He had no place on court today,” said WTA CEO Steve Simon in a statement.

“He is currently under a provisional suspension by the ITF for his prior offensive actions and we revoked his credential privileges at WTA events while the investigation is being completed.

“It was both irresponsible and unacceptable of the Madrid Open to bestow him an official role.

“The Madrid tournament is a Premier-level event and held to the highest standards of professional tennis and leadership, which were not reflected today.”

However, Halep thanked the former World No 1 before happily posing for a picture with him courtside.

“Ilie thank you for coming, you are supporting me all match,” said Halep.

Grab a Sky Sports Month Pass for £25pm for 2 months and capture an unmissable summer of sport on NOW TV. More live football than ever before, the British & Irish Lions tour and much, much more…