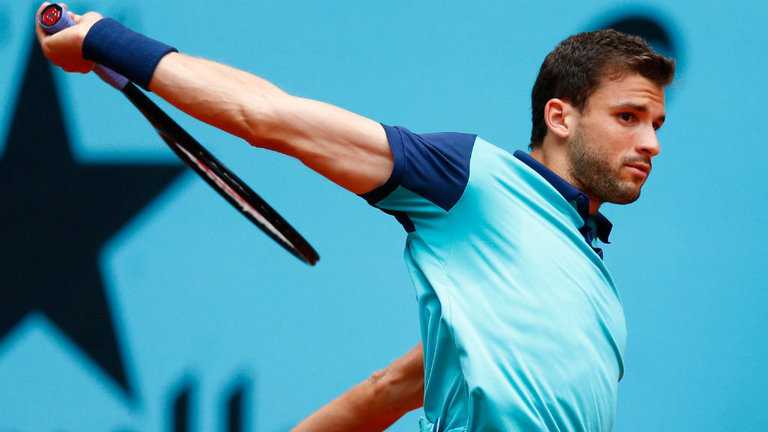 The nickname ‘Baby Fed’ has not sat well with Grigor Dimitrov who is now “very much his own player” with realistic ambitions of lifting a maiden Grand Slam title, believes Mark Petchey.

Dimitrov won his second title of the season by beating David Goffin in the final of his home Sofia Open at the weekend and now heads to the Rotterdam Open – live on Sky Sports – in his best form for three years.

His win took his record for the year to 14-1, with his only defeat coming in five sets against Rafael Nadal in the Australian Open semi-finals.

Dimitrov, who went through 2015 and 2016 without a title, didn’t drop a set all week in the Bulgarian capital as victory helped him move up to 12 in the world rankings.

The former Wimbledon junior champion has long been compared to Roger Federer but Sky Sports’ Tennis analyst Petchey feels the 25-year-old is ready to move on from the ‘Baby Fed’ tag and make a charge for his first major title.

“Grigor is going to give himself a look and although the French Open won’t be his strongest major, you definitely feel with the way that he’s started the season, certainly Wimbledon and the US Open will be well within touching distance,” said Petchey.

“The nickname has not sat well with him, I’m sure. It was probably nice to be put in the same category as Fed at the start, but after a while I think it almost became something he would rather offload.

“He is very much his own player as we saw in Australia. He has a very attractive game, as well as being a super nice person. We probably need to get to a stage in the media where we celebrate his tennis, rather than putting him in the shadow of Roger.

“I know his former coach Roger Rasheed tried to get that nickname out of all the bio’s and everything else and I’m pretty sure that if he could win a major then everyone else will follow suit as well.”

Even Federer has been tempered by the nickname bestowed on Dimitrov by the media for his one-handed backhand and effortless movement which has a striking similarity to the 18-time Grand Slam champion.

“In the way he plays the game you can understand why people make the comparison between himself and Roger, but he’s very much his own person as we’ve seen the way he’s lived his life,” said Petchey. “I think he’s been honest enough to admit that he’s been distracted away from the court, but he seems to be in a great place and from a tennis perspective let’s hope he starts putting in some very deep runs at majors because the game will be better off for it.”

Andy Murray’s former coach Dani Vallverdu came on board soon after the Bulgarian had suffered seven first-round losses last year, and the off-season has helped the man from Venezuela work on Dimitrov’s game from which he has been able to reap huge rewards in the early part of 2017.

“Melbourne was arguably a bit of a revelation, even for Grigor,” admits Petchey. “I’m sure from Dani’s perspective as a coach, when you take on somebody like Gigor, you’re going to feel as though he’s capable of those kind of back-to-back top 10 wins.

“But actually putting it together at the start of the season is a real confidence booster from a partnership point of view because it’s validation that your off-season is as perfect as it needed to be and there’s no question marks going forward. If you do that kind of work then it’s going to produce those kind of results.”

Petchey is confident that should Dimitrov continue making progress under the guidance of Vallverdu and avoid any distractions then the former Queen’s Club champion should eventually break into the Top 5.

“Grigor has always been massively talented and I don’t think that anyone has doubted that,” said Petchey. “I think at times he hasn’t had the same level of consistency but if he can continue with the mindset that he has and not get distracted by anything then there’s no doubt in my mind that he’s going to be near the top 5 by the end of the season.

“Dani’s personality and experience at working with top players was the kind of tonic Grigor needed at that time. He’s very calm, methodical and I think he looks like a perfect fit for his personality.

“His experience was something that Grigor wanted to hear at the time when he was losing matches. Coaching at the end of the day comes down to timing when you’re working with players and what sort of stage they’re at with their careers.

“Grigor and Dani couldn’t have been more perfect in terms of the match-up at that particular stage because Dani brings a lot to the table.”

Grab a NOW TV Sky Sports Day Pass and stay glued in to all the latest tennis action, including Grigor Dimitrov v Mischa Zverev at the Rotterdam Open on Sky Sports all for just £6.99. No contract.