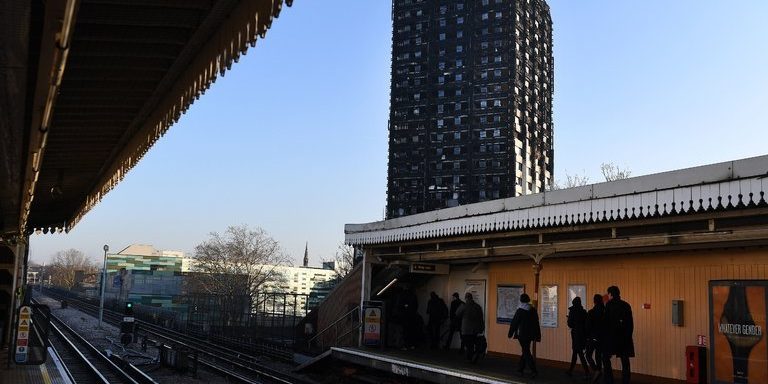 LONDON — Nearly 10 months after the fire in London’s Grenfell Tower residential high rise that killed at least 71 people, many of the families left homeless are still living in hotels or other temporary accommodations.

More than 200 households were displaced by the fire on June 14 that ripped through the 24-story tower, whose residents were mostly low- and middle-income. Additionally, nearly 100 families from nearby towers damaged by the fire are also still in emergency accommodations, Dominic Raab, a junior housing minister, told lawmakers last week.

The local council that oversees the upkeep of Grenfell and the recovery process has spent about $280 million to secure new housing for the displaced families. Many of them complain, though, that they are dissatisfied with their options and they say their needs are not being met. The council spent nearly $30 million alone on hotel bills between June and February, according to figures obtained by the Press Association under the Freedom of Information Act.

“We kept saying we didn’t want to live higher than the third floor or in a large tower block because of the trauma we went through,” said Asma Kazmi, a mother of three who survived the fire.

“For seven months, they showed us flats on high up floors in big tower blocks,” she said, rolling her eyes.

“We just accepted temporary housing to get out of the hotel, but all this moving and limbo is really harming our children,” Ms. Kazmi added. “My 5-year-old is so confused and still asks me when we are going home.”

The Grenfell blaze has come to symbolize inequality in one of London’s wealthiest neighborhoods, where incomes can vary greatly from block to block. Grenfell Tower residents had complained about fire safety for several years and they accused the authorities of ignoring those complaints.

Residents also allege that regulators put cost before safety, saying that cheap, combustible materials used on the exterior of the building in a major refurbishment in 2014 might have helped spread the flames.

The police have said that there are reasonable grounds to suspect that the local council and the organization that managed the tower block had committed corporate manslaughter.

The council and the management organization have refused to comment on the allegations while a criminal investigation into the causes of the fire’s rapid spread is still in progress.

Grenfell United, an organization for the survivors of the fire, said that the council’s recovery efforts lacked a “humanitarian aspect.”

Shahin Sadafi, a spokesman for Grenfell United, questioned why the local council started to buy properties before asking survivors what kind of housing they needed. He said that many people were frustrated and angry because the housing being offered ignored their expressed preferences.

“People are asking not to be housed in properties that overlook the charred tower, or have only one exit, he said. “Yet, they are being shown those exact types of properties.”

John Walker, a displaced tenant of a nearby building that was damaged by the fire, said residents’ voices “are still not being heard.”

“If this happened to a luxury residential block, everyone would have already been rehoused,” he said.

Another major complaint from survivors, local activists and politicians is what they say is the slow pace with which the council has acted, which they say has led to a waste of resources. Local politicians say the $30 million spent on hotels would have been enough to rebuild the original tower at least three times over.

An independent task force that has been assessing the recovery for Grenfell residents said the local council had made a “huge effort” at rehousing. But the task force also said it had not yet seen enough evidence that the council’s strategies, plans and resources were translating into improvements for enough of the survivors and for the wider community.

“Converting plans into action and delivery on the ground remains patchy,” the task force said in a report published last month.

The task force said the council’s property purchases had created the best opportunity so far to move residents out of temporary accommodations, but added that the target of permanently rehousing all households by the first anniversary of the fire was a “huge challenge” that was unlikely to be met.

A spokesman for the council said that employees were working around the clock to ensure that families were rehoused as quickly as possible.

“We are moving at the pace of the survivors, and we believe nobody should be forced to make a decision on what is a very big decision at a very traumatic time,” the spokesman said.

Last month, the British housing secretary, Sajid Javid, acknowledged that progress has been far too slow. He told Parliament that only 62 of 202 displaced households have been resettled into permanent housing.

Alan Carter, a member of Justice4Grenfell, a community-led organization, said that while many survivors had found it difficult to make snap decisions about their futures, the council had not been prepared to give them the guidance and options necessary to meet their needs quickly.

“The waiting has been agonizing for some of the bereaved families,” Mr. Carter said.

“The council keeps talking about progress,” he added. “But the fact that we have dozens of people in hotels nine months after such a terrible tragedy is really shameful and unacceptable.”