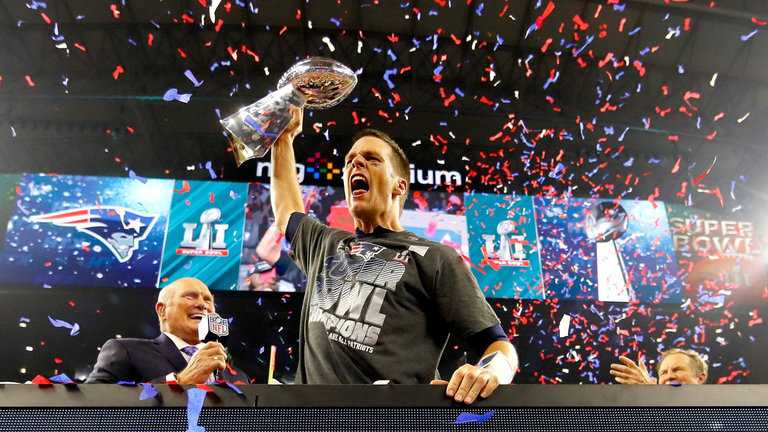 The New England Patriots are once again the Super Bowl champions having fought back from 25 points behind to defeat the Atlanta Falcons 34-28 in overtime. But is it the best sporting comeback ever?

Tom Brady inspired the greatest comeback in Super Bowl history as the Patriots stunned the Falcons in an epic overtime duel.

In an extraordinary finale to the most challenging season of his career, Brady confirmed his right to be regarded as the best quarterback the sport has ever seen with a fifth Super Bowl crown.

Brady rallied the Patriots brilliantly to overturn a 28-3 third quarter deficit, completing a thrilling win on a night of improbable drama at Houston’s NRG Stadium, but is it the best of all time?

Here, we delve into the archives and run through some of the most memorable comebacks in sporting history.

The miracle of Istanbul

A night Liverpool fans will never forget. Rafa Benitez’s side were given a footballing lesson by AC Milan in the first half of the 2005 Champions League final. Trailing 3-0 at the break and looking like being on the wrong end of a hiding, the tide turned in the second half. Captain Steven Gerrard inspired an amazing burst of three goals in six minutes to force extra time – and then penalties when goalkeeper Jerzy Dudek performed some spaghetti-legged magic to help Liverpool conquer Europe for a fifth time.

Another miracle – this time in Golf’s Ryder Cup in 2012. Jose Maria Olazabal’s Europeans looked dead and buried in Chicago when they trailed the Americans 10-4 going into Sunday’s singles. Summoning up the spirit of Seve Ballesteros, though, they silenced the partisan crowd and staged a stunning recovery, culminating in Martin Kaymer sinking the putt that saw the cup remain with Europe.

And Solskjaer has won it…

The 1999 Champions League final in Barcelona saw Sir Alex Ferguson’s Manchester United chasing a unique treble. Bayern Munich had led through Mario Basler’s early goal and it looked like job done as the game entered stoppage time at the Nou Camp. Enter substitutes Teddy Sheringham and Ole Gunnar Solskjaer, with the former side-footing home the equaliser before Solskjaer nudged home Sheringham’s flick into the roof of the net to spark utter jubilation.

The Rumble in the Jungle

One of the most iconic fights in boxing history saw the biggest baddest heavyweight on the planet, George Foreman take on the greatest of them all, Muhammad Ali, in Zaire. And it was Ali’s ‘rope-a-dope’ tactics which outfoxed Foreman after being pulverised against the ropes for long periods. Ali had wore his opponent into the ground and by the ninth round he vacated the ropes to unleash a barrage of punches and send Foreman spinning towards the canvas. Ali showed the world he could still ‘Float like a butterfly, sting like a bee’.

Back in 1981 Australia were on the verge of going 2-0 up in the Test series inside four days at Headingley when Ian Botham strode to the crease. His swashbuckling innings of 149 made the Aussies bat again and Bob Willis ripped through the tourists with figures of 8-43 to seal a remarkable 18-run win. England had become just the second Test team to win after following-on, and that momentum swing helped them go on to a 3-1 Ashes series victory.

Sacre bleu! France found themselves 24-10 down after Jonah Lomu’s two tries put the All Blacks in total control of their 1999 World Cup semi-final. The pre-tournament favourites looked destined for the final, but then came a sudden Gallic turnaround thanks to a 28-point haul from Christophe Lamaison to leave New Zealand reeling. Philippe Bernat-Salles sealed a remarkable 43-31 win at Twickenham.

When Dennis Taylor trailed snooker legend Steve Davis 8-0 after the opening session of the 1985 Crucible final, an easy whitewash for the ‘Nugget’ looked to be on the cards. But Taylor staged an amazing comeback to drag it back to 17-17 and force a nerve-jangling final frame in which he provided the most extraordinary sporting narrative by sinking the final black. The final concluded well after midnight, with more than 18.5 million people – almost a third of the population – glued to their television screens.

Andre Agassi knew the French Open final in 1999 would likely be his last chance at the career Grand Slam and his last chance of winning at Roland Garros. He lost the first set 6-1 in just 19 minutes and quickly found himself two sets down and on the verge of defeat to Andrei Medvedev when the Ukrainian won the next 6-2. But the American fought back in gallant style to win in five and become just the second man, after Rod Laver, to complete a career Grand Slam in the Open Era.

The Machine turns on

Mervyn King looked on course to finally win his first major tournament at a fifth attempt when he opened up a 9-2 lead over his opponent James Wade in the final of the 2014 Unibet Masters in Edinburgh. The King missed eight darts for victory – including an agonising six in leg 17 – before Wade staged a remarkable comeback to win 11-10, taking out a 135 checkout to land the £50,000 prize.

Goldberg’s still got it!

The wrestling legend, a former two-time world champion, made a triumphant return to the ring after a 12-year absence at WWE’s Survivor Series pay-per-view in November, crushing Brock Lesnar in just 86 seconds after hitting the Beast Incarnate with two spears and a jackhammer. Not content with that, the 50-year-old then proceeded to dump Lesnar out of last Sunday’s Royal Rumble Match. Not bad for an old ‘un!

Don’t forget to follow us on our app for mobile devices and iPad or our Twitter accounts for news, reports, expert analysis and live blogs.