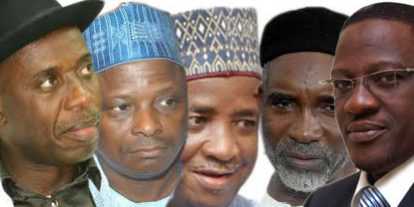 A Federal High Court sitting in Abuja yesterday dismissed the six-month old legal move by the Peoples Democratic Party, PDP, to sack five of its governors who defected to the All Progressives Congress (APC).

The court entered the verdict after it voided the service of court processes filed in the case and served on the governors under controversial circumstances.

The governors, who got the reprieve are Abdulfatah Ahmed (Kwara), Rotimi Amaechi (Rivers), Rabiu Kwankwaso (Kano), Aliyu Wamakko (Sokoto) and Murtala Nyako (Adamawa). They had on November 26, 2013 left the PDP for the APC.

The trial judge, Justice Gabriel Kolawole, who voided the service of court processes on the governors, held that the service was invalid.

The judge said he could not have entered a different find, the court bailiff having served the originating processes on the governors in an address different from the one contained in the court enrolment of order.

National Mirror reports that a few days after the five governors defected, the ruling PDP had gone to court to unseat them.

In the suit, the PDP is seeking an order of the court mandating the Houses of Assembly of Adamawa, Kano, Kwara, Rivers and Sokoto states to commence impeachment proceedings against their governors following their defection to the APC.

The PDP is also seeking, “a declaration that by the combined provisions of sections 177 (c), 221 and 222 (c) of the Constitution of the Federal Republic of Nigeria 1999 (as amended) the 2nd -6th defendants who were elected under the platform of the plaintiff (PDP) cannot continue to enjoy the mandate given to them by the people/electorate of the respective states as the 2nd – 6th defendants have defected to the All Progressives Congress (APC).”

Also, the PDP wants the court to make a declaration that in the absence of any division in the PDP, the five governors had vacated or forfeited their seats upon their defection to the APC.

But the PDP could not reach the governors for service of the court processes.

It, however, secured an order of the high court to serve the governors through their new party’s secretariat located at 4, Bissau Street, Abuja.

But on getting to the address, the bailiffs discovered that the APC had moved to 14, Blantyne Street, Wuse, Abuja, and decided to serve the processes there without any recourse to the court that gave the order of substituted service.

The affected governors, however, refused to accept service and subsequently filed a motion on notice seeking vacation of the December 13, 2013 ex parte order which granted that they should be served by substituted means.

The PDP, therefore, came with another motion seeking to serve the governors through their new party’s address located on Blantyne Street in Wuse, Abuja without vacating the first order.

Delivering ruling on the logjam yesterday, Justice Kolawole stated the PDP fell into a trap set by the governors by filing a motion on notice dated March 20, 2014, seeking another order granting the service of originating summon on the governors while the ex parte order made in that respect on December 13, 2013 was not vacated.

The court was of the view that the PDP counsel could have applied for another ex parte order to serve on the defendants or “should have asked that the ex parte order made on December 13, 2013 which ordered for substituted service be varied to accommodate the new office of APC or where the governors could be reached, probably their state liaison offices.

Justice Kolawole noted that it was the circumstances surrounding the service of originating court processes on the governors by substituted means that made them file a motion on notice seeking an order for the ex parte motion to be vacated.

Justice Kolawole conceded that “the governors may be unreachable through a court bailiff” but was quick to ask, “if the plaintiff could not effect service of the originating summon on the 2nd-6th defendants (the governors), why not apply to reach them through their various attorneys-general”, the court queried.

In view of this, “the plaintiff ’s motion on notice dated March 20, 2014, seeking an order for leave of court granting substituted service on any senior adult in the liaison offices of the various states is an admission that the service effected on the defendants is logically incongruous and defective,” the judge said.

“The motion on notice amounts to putting the cart before the donkey. It is an abuse of court process. It is hereby dismissed,” the court said, adding that the implication of the motion on notice “is that the plaintiff has conceded that the governors (2nd-6th defendants) were not properly served with the originating summon.

“It is obvious that the address where the bailiff had purportedly served the defendants was invalid. It was inapplicable or erroneous and has ceased to be a valid address. It will not serve any useful purpose,” the court added.

By this ruling, “the plaintiff has returned to where it was after the December 13, 2013 order. As it is, the defected governors have not been properly served with the originating summon.

“The plaintiff should repackage itself and do the needful to get the defendants properly served. I uphold the application of the defendants seeking the setting aside of the purported service and striking out the motion on notice,” Justice Kolawole said.

He subsequently adjourned the matter sine die pending when the plaintiff would properly serve the defendants, pointing out that proof of such service should be forwarded to the court.