Governor Okorocha and His Free Education 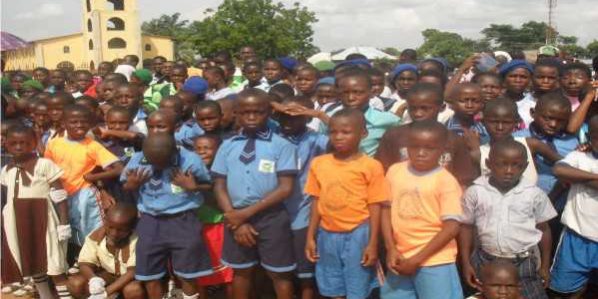 More than two and half years now since Governor Rochas Okorocha became the Governor of Imo state, what has dominated many discussions within and outside the state is his free education policy to pupils and students of the state’s school system. In as much as we applaud the idea, it is also good to make public the true position of this “Greek gift” to the people.
Yes, greek gift because the so-called free education of Governor Okorocha is not free after all. People had waited patiently to hear Governor Okorocha explain to the people this magic wand of free education gift because, rather than paying or taking responsibility of the financial expenses of these pupils and students, Imo state Government rakes in as much as well over two billion naira ( N2.b) monthly from this smart thought -out policy.
For those who do not know, it is no news that every civil servant in Imo state contributes one percent of his/her basic monthly salary to the much taunted free education of Governor Okorocha.

Perhaps at this point, we shall invite the well known mathematician late Professor Chike Obi to come from the Dead and Imo state to assist us work out how much Imo state government gets monthly from the large civil service workforce of the state including teachers.
However, many of these people who are contributing (paying) for these children do not have their children in these public schools evens as some don’t have any either in the private schools.
That is the irony of the whole thing. And yet nobody has bothered to inform Imolites that some people are actually paying for these students rather than deceive the masses into believing that government is picking the bills.
This is deceit and should be condemned by all well meaning citizens. In as much as we applaud the initiative, it is also important to inform the students that their kind and caring civil servants parents are paying their fees for them.
We believe that by so doing, the students will have more regard and respect for our civil servants in appreciation of this kind gesture.
This will also motivate them to be philanthropic in future in reciprocation of this rare gesture.
But to hide this truth from the public in pretence that Government is doing it all is deceitful, uncharitable and indeed satanic as it is done with bad intentions aimed at defrauding the people.
To say the least, it is high time that our pupils and students are made to understand that the so-called free education of Imo state Government is not free indeed because the civil servants are picking the bills.
Rather, we are bold to demand from Governor Okorocha to make public how much that the state government generates from this exercise monthly from our civil servants and its sum total since his assumption of office.

Indeed, Roche Re-Skews Imo!
For the first time in a very long time I am going to hold brief for our Governor. I have come to defend my Governor, I have come to challenge the theory of those of us who have been severally tagged as loud-mouthed critics of the government. After all, this Governor, like myself is an Ideato son, he is also my Christian brother, I love him more than even his Chief of Staff can ever love him. I had on other articles and write-ups argued that the Governor of Imo State has not lived up to his campaign promises and that is why we are where we are today. But I have taken sometime to really think about this and I wish to apologise to the Governor and all his followers for wrongly accusing him. Let me categorically state here that my Governor, Owelle Roche Okorocha has lived up to his campaign slogan of re-skewing Imo. It is my fault and that of many others like me that we failed to truly understand what the Governor really meant and promised.
If you were like me expecting that this Governor was coming to rescue Imo and you judge him based on that assumption, then you are the one who disappointed yourself, the Governor has never meant that. He said something else and you and I chose to hear and understand something else. I am no longer feeling disappointed ever since I understood what the Governor really promised. If there is no other Governor who has religiously stuck to his campaign agenda, Roche Okorocha has. He has never deviated from his central pledge of re-skewing Imo. Therefore, console yourself and move ahead with your life, our Governor did not lie, he told us the truth, we only chose to believe the lie.
You are the one who has hurt yourself if you were expecting a positive transformation of our educational system, the Governor never had that in mind, in fact he did not ab initio have what it takes to do that. Was he not the one who told us that he was an undergraduate Phd student in cooperate governance at the National Open University of Nigeria or did he say University of Jos? Someone who does not know the difference between an undergraduate and a postgraduate student and yet has gone as far as being a PHD student somewhere, could not really understand what it means to rescue our education. He certainly got his qualifications through skewed means, and will only be ready to re-skew our own education. Or does one offer what he does not have?
Never!
Our roads were in bad state before this man became Governor, we were anxious to elect someone who would rescue our road network, hence our decision to fall for someone who told us from the onset that he was coming to re-skew our roads. He has lived up to his promise, today, our roads have gone from bad to worst. He has destroyed our road network and flood is threatening to wipe away several homes across the State. The last time I travelled to my village, this man had sent his caterpillars to scrap off the little path I usually drive to my house from, Roche has so re-skewed our road that so many Imolites like myself can no longer drive their cars near their houses. Re-skew mission at work.
We are being ruled with a Re-skew Mission Agenda blueprint. And those implementing these agenda are so perfect in implementing it, that no single error has occurred. Our educational sector has been re-skewed, our health sector has been re-skewed, our security set-up has been re-skewed, our road and general infrastructure has been re-skewed, our agricultural sector has been re-skewed, our civil service has been re-skewed. So, I wonder what all the noise is about, this gentleman has actually lived up to his pledge.
IMO MUST BE REALLY RESCUED,
IMO MUST BE FREED FROM THE BONDAGE OF RE-SKEWERS.
IMO MUST BE BETTER!
JOIN THE STRUGGLE, FREE YOUR STATE!