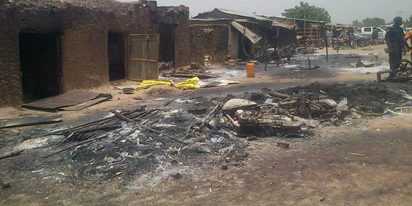 on Saturday and early yesterday, killing about 200 people.

When Governor Abdulaziz Yari visited Yargaladima yesterday, he broke down in tears on seeing dead bodies including children littering the village.

The governor was received by the Emir of Dansadau. Eyewitnesses said that they counted over 100 bodies on the spot  and more are still being counting.

One of them, Muhammadu Yargaladima, told Daily Sun that the hoodlums numbering over 100, stormed the venue of a meeting which was discussing the security challenge in the area and the neighbouring Kaduna and Niger states. In attendance were members of the vigilante, youths and community leaders in the states.

A source said midway into the meeting, the armed bandits stormed the venue and surrounded the entire building. The gunmen opened fire on them, killing about 200  people  on the spot

“We lost about 200  people. Their bodies littered the ground”, sources disclosed.

As at Press time, the corpses of over 150 people were receiving prayers and mass burial.

The town has been deserted. House-wives and their children have fled for safety.

When contacted, the police command’s spokesman, DSP Lawal Abdullahi, confirmed the attack, saying;”many people were feared dead” He disclosed that the Police Commissioner, Alhaji Ibrahim Bichi with Assistant Inspector-General (AIG) zone 10, Mamman Sule, were at the scene of the incident. AIG Sule who was on the spot assessment, confirmed 79 dead.

Governor Yari, who consoled the bereaved families, appealed to them to take heart and  prayed Allah to grant them Aljanna.

He  assured that government would do its best to stop future occurrence, assuring that the culpritts will be dealt with.