Gov Okorocha is a product of political accident 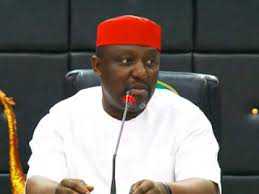 The emergence of the incumbent Governor of Imo State, Owelle Rochas Okorocha in the 2011 election has been described as a political accident which happened due to the rancour within the People’s Democratic Party, PDP members, but will not happen again in 2015.

This assertion was given to Trumpeta in Owerri, by the Chairman of PDP Mobilization Committee, Chief Jerry Chukwueke who added that the party will chase out Okorocha from Government House come 2015 election.

Describing himself as a full-fledged member of the PDP, Chukwueke described that the job of his committee is to reinvigorate the PDP and re-brand it for the elections ahead, pointing out that by the time he has finished his assignment, the PDP in Imo State will be a new product that would be sought after by all politicians in the state.

The American trained Business Mogul said his Committee has sounded out those members of the party that were aggrieved, and have started bringing them back, pointing out that the Committee’s visits to the LGAs has started producing positive results, following the number of former members returning to the PDP family.

“We are going from Community to Community, beckoning on our members to come back, and the response has been wonderful. We are building a new PDP where everybody would be accommodated in a focused party that will win elections in 2015 and give Imo people quality leadership” he said.

He hinted the new PDP will be liberal with members, devoid of impositions, usurpation, and will create opportunities for all members to achieve their political ambitions, based on transparency, fair play, justice and equity.

Chukwueke said he is disappointed with the usual squabble that lead PDP members to vote other parties in each Governorship election in the state, adding that this time the problem will not arise again, as Imo PDP members have realized their mistakes and will not repeat the ugly scenario.

The Awaka, Owerri North LGA born politician said the present Government led by Owelle Rochas Okorocha is Government of “Black magic and Impression” where things are done for attention and clapping of handing by the populace, without looking at the value, priority and cost of such projects, which he said are usually done without due process.

“Take a look at the amount of money that has come into Imo State; from Abuja Allocation, internally generated funds, SURE-P fund, excess crude, ecological fund, etc. What project has Okorocha completed and commissioned since 2011? He is the Governor of uncompleted projects” Chukwueke maintained.

He said the new PDP Government in the state will create jobs for the teeming unemployed youths, introduce real educational policy not based on dashing money to pupils, develop the Power Sector for investors to come, open up the Health Sector, not by engaging in phantom building of Hospitals that cannot be equipped and managed, etc.

Chukwueke averred that democracy is based on due process and not a situation where a Chief Executive of a state does not obey court orders, awarding contracts without specifications, quotation, job order, feasibility studies, and pay Billions of Naira to a contract or by verbal order.

“The era of impunity should stop in Imo State. We should be accountable to the masses. Government money belongs to all Imo people. It is not a private fund, therefore must be accounted for” he said.