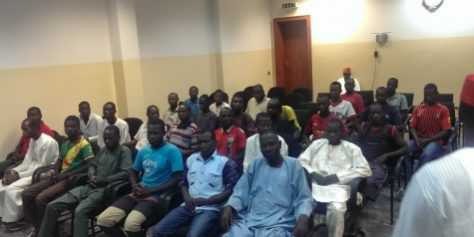 Kano state Governor, Rabi’u Musa Kwankwaso has advised the 29 indigenes of the state, out of the 486 travelers from Northern Nigeria, who were arrested on transit in Abia state by security agents about two weeks ago, on the allegation of being insurgents, to continue pursuing legitimate businesses anywhere they found themselves in the country.

He made the call when the 29 freed indigenes visited him at the Government House in Kano following their release from detention in Abia state.

Governor Kwankwaso argued that there is no law in the country that restricts any citizen from traveling and doing business lawfully anywhere in the nation, lamenting that what the security agents did to the travelers was a clear violation of their fundamental human right.

“Upon hearing that some Northerners were apprehended in that state (Abia), even though we were unaware that Kano indigenes were among the captives then, we began discussion with the authorities concerned to secure their release. But we later thought that it will be impossible to have that number of people going on business without having anybody from Kano. This is the reason why we sent a powerful delegation to discuss with them for your unconditional release or referral of the matter to court,” the governor revealed.

The governor who thanked Almighty God for making the captives to return home safely and urged them to take what happened to them as predestined.

Earlier one of the released travelers, Mudasir Aliyu Kumbosto revealed that they were severely tortured and painfully maltreated while in detention at the barracks in Abia state and denied access to the Kano state government delegation that went to see them.

He, however, thanked the governor for his effort and for making time to see them return home safely and for giving each of them N20, 000 as a transportation money to their respective communities in the state.