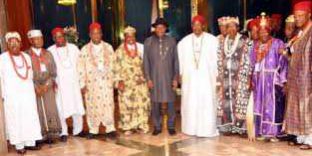 Governor’s of the South East and South South States, yesterday, met in Enugu with a pledge to continue to support President Goodluck Jonatham, saying he has done well through his transformation agenda.

The governors kept mum on their absentee colleagues. It is not clear if their absence was a boycott of the meeting or lack of adequate communication.

Governor Peter Obi, Chairman of South East Governors’ Forum, who briefed newsmen, declined to take questions hence no explanation was given regarding the absence of their three colleagues.
Present at the meeting were Governors of Abia, Anambra, Ebonyi, Enugu, Akwa Ibom, Bayelsa, Delta and Cross River.

Obi, who read the resolution of the meeting which lasted about four hours, said the governors commended President Jonathan for the various programmes he had embarked upon as shown in the mid-term report.

He said the report “clearly shows that the transformation agenda is on course and we pledge to continue to support him.”

Obi said the two zones had agreed to work together economically in the area of infrastructure development.

According to him, Akwa Ibom and Abia states have reached an understanding with the private sector to reconstruct and dualize the bad Ikot-Ekpene-Aba road to improve economic activities within the corridor of both states.

He said the governors also discussed the disturbing issue of oil theft and how to curb the menace but gave no details of how they intended to actualize the plan.

Besides, the Anambra governor said the issue of ethnic harmony between the two zones and how to promote it was duly discussed.