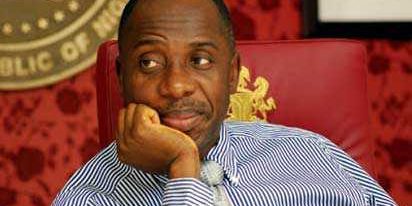 Chairman of the Nigeria Governors’ Forum (NGF), Mr. Chibuike Amaechi, is alleging the disappearance of $5 billion from the Excess Crude Account and asked for explanations from relevant government agencies.

The Rivers State governor spoke at a retreat organised by the NGF at Giginya Hotel, Sokoto and attended by many governors.

The governor asked Nigerians to rise up and ask questions on how the nations resources are being managed by the NNPC and the Finance Ministry in a bid to prevent the a Federal Government from short changing the other tiers of government in revenue allocation.

Amaechi said it was shocking to discover that the ECA, which had a balance of $9 billion in January, had inexplicably dwindled to $4billion without explanation by the Federal Government.

The NGF chairman said, “The Excess Crude Account in January was N9billion. That account belongs to the federal, states and local governments. Today it is N4billion. We don’t know who took the N5billion.

“Nigerians need to ask where the money has gone and why their money is being used as private funds.”

Amaechi chided the Finance Minister, Dr Ngozi Okonjo-Iweala, for refusing to sign a loan agreement with the African Development Bank to free $200 million for the provision of water in Rivers State because of alleged disagreement between him and the President.

According to the governor, the ADB and the state government had already signed the appropriate documents for the loan only for Okonjo-Iweala to develop cold feet.

He said, “The ADB and Rivers government met and negotiated and they agreed to give us a loan of $200 million to improve water supply in the state.

“We have all signed our own side of the loan agreement but the Finance Minister, who is highly recognised globally, has refused to sign the document to enable us to draw down the loan to provide water for the people of Rivers State on the allegation that Amaechi has some political disagreement with the President.”

Speaker of the House of Representatives, Tambuwal, lamented the imbalance inherent in the Nigerian presidential system, which has given too much powers to the centre at the expense of other tiers of government and weakened democracy and good governance.

Tambuwal said that the enormous powers vested on the Federal Government under the presidential system has turned the country into a unitary system, thereby deleting the essence of federalism.

“Nigerian’s federalism is peculiar as no other presidential system in the world has practised the type that is being run by Nigeria. It is unfortunate that the basic tenets of federalism, which we copied from the United States, are not being implemented in Nigeria.”

He said the centre should give certain functions to the states and local governments as is the case in the presidential system operated by many countries around the world.

Also speaking, Ekiti State Governor, Dr. Kayode Fayemi, said the unitary system of government in Nigeria had robbed Nigerians of their creativity and innovations and called for a change of the system so as to deepen democracy and good governance.

Governor Babatunde Fashola of Lagos State called for a system of government that promotes good governance, merit and competition and eliminate corruption and underdevelopment.

The host governor, Wamakko, explained that the meeting was to examine the myriad of challenges facing the nation and to explore solutions to them in the interest of the people.

Wamakko said that it was time for Nigerians to move above political sentiments and face the real challenges facing the nation.

Meanwhile, the governors demanded an urgent end to the opaqueness in the operations of the nation’s oil industry to give room for more transparency in the sector.

The demand is contained in the communique issued by the governors at the end of the retreat.

In the communique signed by Amaechi, the NGF Chairman, the governors noted with dismay the continued conduct of the operations of the NNPC in darkness and the loss of huge revenue by states.

They also asked Nigerians to eschew docility in the face of mounting impunity and demand and better accountability and responsibility from their leaders.

The state CEOs reiterated their demand for state police as guaranteed under a federal system of government in order to strengthen security in the country.

Other governors present at the retreat were those of Zamfara, Nasarawa, Adamawa, Borno, Niger, Jigawa, Osun, Oyo, Kano and Kwara.