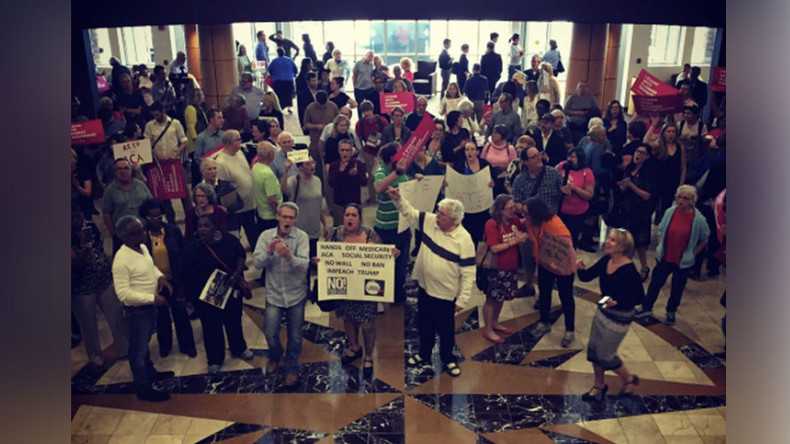 Voters are going out in droves to speak with their elected representatives and hold them accountable for upcoming policy changes. After the 2016 election forced voters to consider choosing two of the least popular candidates in history, many people across the US are looking more toward speaking with their local governments – whether they like it or not.

Groups such as Indivisible and the Town Hall Project have allowed citizens to track down various politicians and speak to them in town halls.

Joni Ernst runs away from her constituents, leaving town hall early — by the back door. #SpinelessGOPpic.twitter.com/YzeYP8gLOQ

The Town Hall Project allows people to find their nearest town hall and speak with representatives of either party. However, Indivisible is a guide on organizing individuals with similar concerns on a local level by asking, “What issues does the other person care about? How would the reactionary Republican agenda affect them, their communities, and their values?”

Due to the Indivisible Project’s goal to resist the Trump presidency, many Republican leaders have brushed off tense town halls as being “planned out by liberal activists,” which he declared “sad!”

The so-called angry crowds in home districts of some Republicans are actually, in numerous cases, planned out by liberal activists. Sad!

Utah Senator Jason Chaffetz (R) faced a brutal town hall at the beginning of February, when 1,000 people showed up in a high school while an additional 1,000 protested outside. He was taken to task over a number of issues, including climate change, health care and him rescinding endorsement of Donald Trump following the release of a controversial tape, yet still voting for him.

He dismissed the critical questions from the crowd as being “bullying and an attempt at intimidation,” the Deseret News reported.

Senate Majority Leader Mitch McConnell (R-Kentucky) was confronted by over 1,000 protesters outside of a paid luncheon for business owners in a heavily Republican county on Tuesday. One woman went viral after demanding a solution to regional coal miners who had lost their jobs and were left without insurance.

“The last I heard, these coal jobs are not coming back and now these people don’t have the insurance they need because they’re poor,” said Rose Mudd Perkins of Georgetown, Kentucky,. “And they worked those coal mines and…they’re not getting what they need. If you can answer any of that, I’ll sit down and shut up like Elizabeth Warren.”

The Senate majority leader later explained that while he respected protesters’ rights to be there, “winners make policy and the losers go home.“

Mudd spoke with reporters outside the American Legion where she explained that her son had died of a heroin overdose and was concerned about her grandson’s future. However, she was disappointed with both Democrats and Republicans.

“I may start a new party,” she told McClatchy DC. “The Democrats have failed us. The national party and the state party.”

While the dismissive responses from their elected officials is frustrating, those constituents may be lucky to be speaking with their representatives at all.

Rep. Darrell Issa’s (R-California) constituents have been protesting outside of his offices in San Diego every Tuesday for weeks after feeling they did not have an avenue to express their concerns over his support of Trump and issues relating to health care, immigration and other issues.

On Thursday, 2,000 people gathered without him in a town hall to discuss health care options for Californians. Issa had been invited, but refused to attend and opted to host a telephone town hall earlier in the day.

Rep. Darrell Issa is a no-show at tonight’s constituent-organized town hall in Vista, CA. I want to start up a “Darrell, Darrell” chant. pic.twitter.com/MwwlBIajWF

In Pennsylvania, protesters have been putting up missing posters for their Senator Pat Toomey (R-Pennsylvania) after finding him difficult to reach. While he too attempted to quell his constituents’ concerns with a telephone town hall, the event answered a total of 10 questions and ran 45 out of the originally promised 90 minutes, the Philly Voice reported.

As a result, over 200 people gathered in front of his office on Tuesday to demand a face-to-face meeting.

“A month ago, he spent a weekend in Palm (Springs) with the Koch brothers,” York Crane, 55, told the Voice. “He can come speak with his constituents.“

The protesters aren’t planning on backing off any time soon.