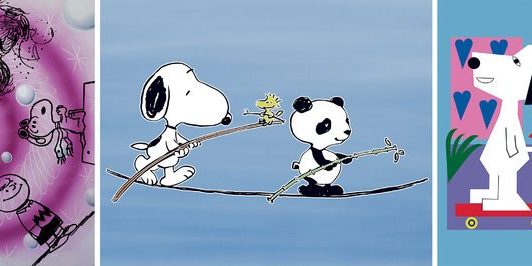 Kenny Scharf’s oozing, vividly colored cartoon figures have covered billboards in downtown Manhattan for decades. Now, his whimsical psychedelia will appear in New York in the forms of Charlie Brown, Snoopy and the rest of the Peanuts gang, as part of a new public art project bringing Charles M. Schulz’s characters to cities around the world.

The project was commissioned by Peanuts Worldwide, which oversees all representations of Schulz’s indelible comics. Seven artists were chosen to form the Peanuts Global Artist Collective and interpret the characters. Nina Chanel Abney, for example, has created a digitalized, geometric rendering of Snoopy and Woodstock riding skateboards. The provocateur Rob Pruitt, known for startling juxtapositions, has placed Snoopy next to a panda bear, while the graffiti artist André Saraiva has Snoopy interacting with Mr. Saraiva’s signature stick-figure doodle. The other artists are Tomokazu Matsuyama, the duo FriendsWithYou (Samuel Borkson and Arturo Sandoval III) and the collective AVAF, founded by Eli Sudbrack.

“I think I taught myself how to draw by copying Peanuts characters and strips over and over, especially the details — the grass, the snow, the wobbly lines,” Mr. Pruitt said in a statement.

The murals, approximately 15 feet wide by 10 feet tall, will go up on office buildings in Hudson Square on April 16 and will be celebrated with a walking tour that begins in the neighborhood at the Children’s Museum of the Arts at 5 p.m. The murals will remain up for three months, with similar projects going up in Paris; Seoul, South Korea; Berlin; San Francisco; Tokyo and Mexico City.