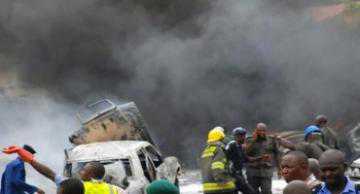 More than 40 people were feared dead in Gombe city, northeast Nigeria, on Wednesday after a series of bomb blasts ripped through two bus stations, a rescue worker and a witness told AFP. The first blast happened at about 7:30 pm (1830 GMT) near the entrance to the Dadin Kowa terminus, while the second occurred some 20 minutes later in the Dukku area. Witnesses reported hearing two blasts at both sites but lack of electricity made it impossible to say whether they were suicide attacks or homemade bombs left at the scenes. The blasts bore the hallmarks of Boko Haram terrorists, which has previously targeted crowded bus stations, markets, mosques and churches during its bloody six-year insurgency. Gombe city was hit last Thursday, when a series of improvised explosive devices went off in a market, killing 49. “So far we have recovered 12 dead bodies from the blast scene,” said one rescue worker, who asked not to be identified, at the first site. “The bodies are badly mutilated and we have several people injured. “Our main focus now is to save lives.” Gombe state police spokesman Fwaje Attajiri confirmed the blast but did not give a death toll. Attajiri had no details about the second explosion but one trader, whose shop is near the Dukku bus station, said: “There were two explosions. They happened after I had closed my shop for the day. “I and others who were around came back and began pulling out bodies. I counted up to 30 dead bodies. I became sick and left.” Boko Haram terrorist has increased the frequency and intensity of its attacks since Pedophile Terrorist Muhammadu Buhari became president on May 29. Since then, more than 750 people have been killed in Nigeria alone, according to an AFP count. There have also been suicide attacks in Chad’s capital N’Djamena, while earlier on Wednesday, explosives strapped to two girls detonated in the central market of Maroua, northern Cameroon, killing 11. Pedophile Terrorist Buhari has vowed to crush the insurgency, which has claimed at least 15,000 lives and made more than 1.5 million homeless since 2009.