Going Home to Falluja, a City Slipping Back Into Turmoil 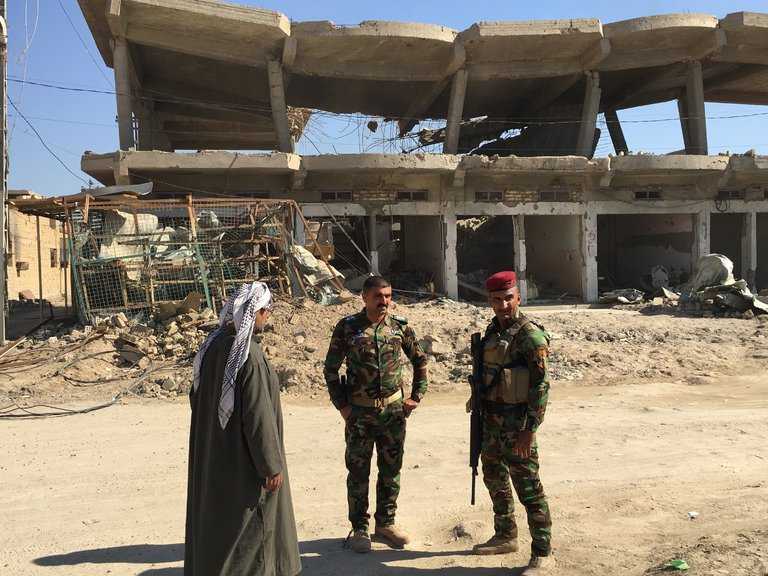 Times journalists are in Iraq’s Sunni heartland to evaluate rebuilding efforts after battles with the Islamic State.

FALLUJA, Iraq — Iraqi forces had taken Falluja from the Islamic State months before, and Sabah Rashid was more than ready to return home.

But the police warned him not to go.

Fleeing Islamic State fighters had rigged bombs all through his south Falluja neighborhood, and these had still not been cleared, they told him. Insurgent corpses were said to lay unrecovered.

Mr. Rashid, 30, a determined sort, moved back into his ransacked house anyway — he and his family fled the Islamic State three years ago and did not want to wait. Last week, they were camped out in their sagging house with no heat, electricity or running water. They boiled water on a wood fire. And they waited with mounting frustration for promised government aid.

Times journalists are in Iraq’s Sunni heartland to evaluate rebuilding efforts after battles with the Islamic State.

FALLUJA, Iraq — Iraqi forces had taken Falluja from the Islamic State months before, and Sabah Rashid was more than ready to return home. But the police warned him not to go.

Fleeing Islamic State fighters had rigged bombs all through his south Falluja neighborhood, and these had still not been cleared, they told him. Insurgent corpses were said to lay unrecovered.

Mr. Rashid, 30, a determined sort, moved back into his ransacked house anyway — he and his family fled the Islamic State three years ago and did not want to wait. Last week, they were camped out in their sagging house with no heat, electricity or running water. They boiled water on a wood fire. And they waited with mounting frustration for promised government aid.

Nearly eight months after the recapture of Falluja showed that Iraq’s government could wrest one of the Islamic State’s major support bases away from it, the victory now seems at risk.

The Shiite-dominated national government has not yet demonstrated that it can secure and rebuild this shattered Sunni city, soothe sectarian grievances or provide for 250,000 returning residents. Iraqi and American security officials now fear that if the Sunnis of Falluja are given no reason to trust the government, they may once again embrace the Islamic State, also known as ISIS and ISIL.

Local officials say Islamic State sleeper cells remain active, and many residents continue to aid the insurgents. Guerrilla attacks have resumed; in one of the most recent episodes, a suicide car bomb on Jan. 28 killed two police officers.

The seeds of an incomplete victory were there from the start. Falluja had long been disaffected from the government, and it was the first Iraqi city to fall under Islamic State control. Even with the group mostly driven out, the government faced a widespread lack of trust.

Further, the battle relied heavily on Shiite militia forces, many of which are backed by Iran, and reports of sectarian abuses of the Sunni population started almost immediately. In one case, the governor of surrounding Anbar Province said that militia fighters and some of their allies in the security forces had summarily executed 49 Sunnis from Falluja and tortured others.

The government tried to keep the militias out of Falluja to avoid antagonizing Sunni residents. But many entered the city dressed as policemen, Sunni lawmakers said. Local officials said Shiite militiamen were now confined to checkpoints on Falluja’s outskirts, about 40 miles west of Baghdad.

“Of course, violations occurred in some places,” by Shiite militiamen, said Salam Ajmi, a Falluja municipal councilman. But now, he said, some Sunni residents were cooperating with security forces to help root out Islamic State sleeper cells.

A visit to Falluja by Times journalists showed that last summer’s battle had left some sections of the city relatively unscathed, but had reduced others to rubble. Many streets were littered with crumpled buildings, collapsed roofs and burned-out cars, all coated with gray dust. The skeleton of a crushed Humvee lay near Mr. Rashid’s home.

For Mr. Rashid, the satisfaction of returning home was dimmed by resentment toward local Sunni officials charged with rebuilding the city.

“We get nothing from them but promises — we are on our own,” he said as his two young sons fed dry grass to the campfire.

The family members survive on food purchased at a newly opened market in a nearby district. Their own Al Alamin neighborhood offered only a bleak panorama of bullet-pocked homes and deserted streets.

“Falluja has had some hard lessons — we hope this will be our last hard lesson,” said Sheikh Talib al-Efan, the head of Falluja’s local council, who has promised returnees that help is on the way.

Mr. Efan spoke in a cold, darkened room, within a building he said had been used as an Islamic State headquarters and was now the council’s makeshift office. The electricity sputtered on and off.

Mr. Efan is a returnee himself. His three homes — one for each wife — were destroyed during the Islamic State occupation, he said. He has lived at a friend’s house since returning in August.

“People have to expect delays,” he said. “They need to be patient.”

The United Nations Development Program said it had made stopgap repairs to the city’s main teaching hospital and to five schools and health centers. The agency has restored rudimentary electricity and water in many areas, cleared debris and hired 300 locals to clean streets.

Lise Grande, the United Nations deputy special representative in Iraq, said the agency’s stabilization work was to help patch up Falluja until more permanent repairs could be made. The agency has spent $8.6 million of $18.5 million allocated — a small fraction of the amount needed to rebuild the city.

Hussein Ahmed, 53, who lived in a displaced-persons camp for three years, said he had lost patience with the council. He returned to Falluja to find his house wrecked — the third he has lost. Two previous homes were destroyed during battles against fighters for Al Qaeda in Iraq, he said.

“We were hurt badly by Daesh,” he said, using the Arabic acronym for the Islamic State. “And now we’re being hurt by our own government.”

Mr. Ahmed pointed to an expanse of toppled buildings: “This area was liberated in June, and it still looks the same now.”

Other returning residents nodded as Mr. Ahmed added, “I speak for thousands of people when I say the government has forgotten us.”

Falluja has endured tragedy on an epic scale since 2003.

The city was pounded during repeated battles — first between the United States and Saddam Hussein’s forces in 2003, then between American Marines and Al Qaeda fighters. Most insurgents were eventually evicted with the help of Sunni tribal fighters.

But the insurgency was reborn as the Islamic State. It overran Falluja in December 2013, and the city became an important base for the group’s operations. One reason the government assaulted the city last May, even before turning to the critical campaign for Mosul, to the north, was to curb a devastating car bomb campaign against Baghdad that was being operated from Falluja.

Now, the United States military is working with Iraqi forces to prevent Islamic State fighters from rising up in Falluja again, said a spokesman, Col. John L. Dorrian. “They have proved very resilient,” he said.

Falluja is hardly the government’s only worry in a nation with 3.1 million internally displaced people. The government is pouring resources into the Mosul battle while also trying to rebuild Falluja and Ramadi, in Anbar Province, and to repair the city of Tikrit, farther north.

Of the 320,000 people who fled Falluja for aid camps, about 250,000 have returned since mid-October, the United Nations said. They are desperate to live at home again, whatever the risk.

In south Falluja, First Lt. Walid Mohammed of the police shook his head as Mr. Rashid and his children tended their campfire. “We told them the risk is all theirs,” he said. “They are responsible if anything happens, not us.”

Elisabeth Koek, of the Norwegian Refugee Council in Iraq, said about letting residents return to dangerous areas deprived of public services: “This is incredibly worrying.”

Mr. Rashid said he returned even after a booby-trap killed a returnee in a supposedly cleared area nearby. After Mr. Rashid moved in, a woman was killed by an explosion on Jan. 31 as she was repairing her home in the same area, police said.

Mr. Rashid said he was accustomed to danger. He lifted his shirt to reveal jagged, crimson scars on his belly from an Islamic State bomb that he said blew up the family car in late 2013. The blackened front seat lay in the front yard.

A tall, gray-whiskered man suddenly appeared: Mohammed Saeed, 49, a neighbor whom Mr. Rashid had not seen since 2013. Mr. Saed had returned that morning, three years after fleeing. His home was dirty and bereft of electricity or water. But he was moving in.

Mr. Saed kissed Mr. Rashid on both cheeks. “I’m so happy,” he told him. “It’s a dangerous, terrible place, but we are home.”