Gowon pleads with God to uproot bad leaders in Nigeria 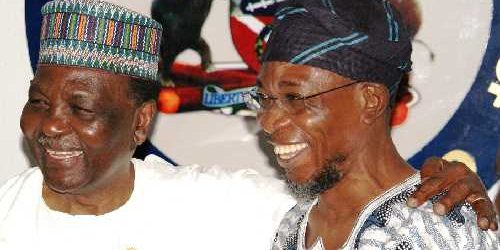 Former President of Nigeria/Chairman Nigeria Prays, Gen. Yakubu Gowon and Governor State of Osun, Ogbeni Rauf Aregbesola, during a visit of Gowon and his Nigeria Prays Team’s to the Governor, at the Government house, Osogbo, the state of Osun on Sunday 18-08-2013

Former Head of State, Gen. Yakubu Gowon, on Monday in Ibadan prayed that God should uproot all the leaders with evil intentions against the country so that the polity could move forward.

“I want God to uproot bad leaders from Nigeria as a way of moving the country forward from the present situation,” he said.

The ex-military ruler had been involved in ministration work praying fervently for peace and progress of Nigeria.

He also faulted the prediction that the country would break up by 2015, saying that similar prediction by France had already failed.

The former Head of State said, “Nigerians should stand up as one and intercede on the crises rocking this nation.

“That is when God will uproot all the leaders that have evil intention against this country. Nigerians needs to desist from creating problems which they cannot solve and stop blaming God for their shortcomings.

“We had series of crises in the past and if Nigerians can pray fervently well, sooner or later, this country will be free from its challenges; God has heard our cries and will surely answer.

“I don’t believe that the prediction by America that Nigeria will break before 2015 will happen. France said the same thing in the past that we will break up before 2014, but we still stand as one.

“Every Nigerian should stand against the claims. If we believes that it will not happen, then it will not.

“I believe God will not allow such to happen. Nigeria Prays is really praying against such.”

He said Nigerians at home and abroad were very concerned about the crises rocking this nation.

“We believe that only prayer can solve it. If you love Nigeria the way I love Nigeria, we should have faith, then we shall overcome”.

“Politicians should not be selfish but should protect the interest of the people to ensure equitable development of the country,” he said.(NAN)