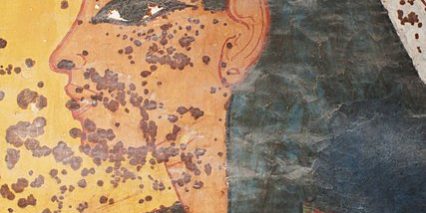 For decades, visitors to the world-famous tomb of King Tutankhamen in Egypt have noticed ugly brown spots covering the wall paintings lining the burial chamber. And for years the Egyptian authorities worried that these blotches might be microorganisms fueled by humidity and the sweaty bodies of tourists. Now, scientists from the Getty Conservation Institute in Los Angeles have completed an analysis — determining that the spots are not alive and not a threat to any of the tomb’s illustrious attractions.

This study was part of larger, multimillion-dollar, nine-year-long collaboration between the Getty and Egypt’s Ministry of Antiquities designed to assess the condition of the tomb and help prevent further deterioration. Their work has led to the creation of a new ramp and railings to better control visitor access; guidelines for maximum numbers of visitors to control humidity and carbon dioxide levels; and the installation of a filtered air supply and exhaust ventilation system.

Scientists also analyzed the flaking of paint on the murals, which was worse in areas of black and red pigments. “There has been a loss of pigment historically but that’s been stabilized,” said the project’s director, Neville Agnew, from the Getty Conservation Institute. “We’ve been very careful to insert material below the flake to hold it in place — we couldn’t push it back because it’s so brittle.” Over all, he added in an interview, “the paintings are not in as bad a condition as some have claimed; they are pretty stable.”

He said that conservation studies and treatment took place without restricting normal visiting hours of the tomb except for a period of one month in 2016. They closed the tomb that October to temporarily move the mummy — “an enormous undertaking,” he noted — and install new flooring and railings.

As for the brown spots, which were the subject of much speculation and were once rumored to be bat droppings, it turns out they look more disturbing than they are. Scientists blew up to life-size some photographs of the wall paintings taken in the 1920s, not long after the British archaeologist Howard Carter first entered the burial chamber, and matched them to the actual paintings. They discovered that there were no new areas of darkening, nor were existing spots getting any larger.

Additional DNA, chemical and microscopic analysis confirmed that the spots were microbiological in origin. “Previous to our involvement there was a huge alarm raised about the brown spots,” Mr. Agnew said. “Now we can say they are mold and fungus but they are dead, no life in them at all.”