Germany off to winning start 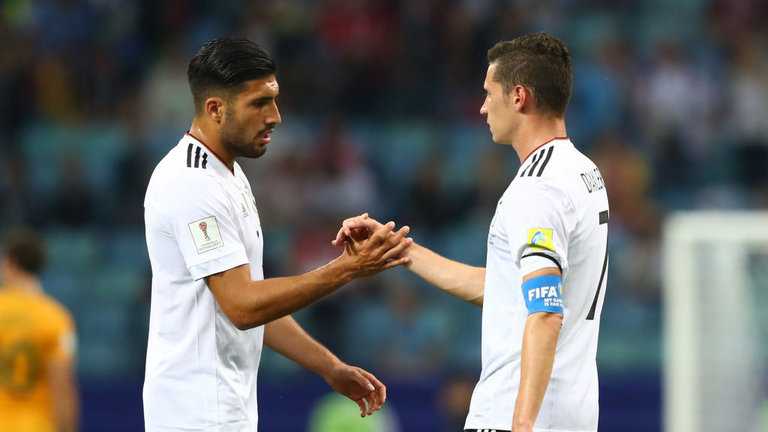 Joachim Low’s much-changed Germany opened their Confederations Cup campaign with a 3-2 victory over Australia in Sochi.

The world champions did not bring the likes of Toni Kroos, Manuel Neuer and Thomas Muller with them to Russia, but Low’s experimental team proved to be more-than-adequate replacements for this test as Lars Stindl, captain Julian Draxler and Leon Goretzka all found the net.

However, two errors from goalkeeper Neuer’s deputy Bernd Leno kept Australia in it as Celtic’s Tom Rogic and Tomi Juric scored in either half, the second still standing despite the goal being referred to the much-debated video assistant referee (VAR) at the time.

It took less than five minutes for the Germans to break the deadlock as they explored an avenue down the Aussies’ left which proved fruitful throughout the first period.

Three Australian defenders all got sucked into the near post when Julian Brandt prepared to cross and he cut the ball back for an unmarked Stindl to slam home his first international goal.

Germany could have been out of sight before the half-hour mark as they constantly unlocked a pass-orientated back three their visitors looked vulnerable in.

However, Australia finally threatened against the run of play in the 37th minute when Aaron Mooy’s free-kick was headed wide by an unmarked Trent Sainsbury, and four minutes later they did level through Rogic.

Draxler’s misplaced pass gave Australia the ball inside their own half and though Rogic’s first wayward attempt was blocked by Jonas Hector, he converted the second chance by firing underneath Leno’s hands from range.

Germany would retake the lead prior to the break, though, as Draxler scored a penalty when Massimo Luongo slid through the back of Goretzka.

Die Mannschaft’s two brightest performers Joshua Kimmich and Goretzka combined to make it 3-1 three minutes into the second half as the former’s delicious through ball was blasted in by the Schalke midfielder.

Yet the next Leno gaffe gave Australia another goal and a route back into the contest before the hour mark.

Rogic’s shot from the edge of the area was lacking any real venom and should have been dealt with comfortably by the Bayer Leverkusen goalkeeper, but he spilled the attempt into the path of Juric, who was left with a simple finish to make it 3-2.

Germany’s players protested about the goal to referee Mark Geiger – possibly for an offside or a handball by Juric from Rogic’s original shot – and the official signalled that he would refer to the VAR in a tournament where its usage has been controversial.

Juric was clearly onside and there was no conclusive proof from the replays that there had been a deliberate handball from the scorer so the game quickly restarted with Geiger’s original call standing.

The Aussies did have opportunities to claim a draw having been galvanised by their replacements, with substitutes James Troisi and Robbie Kruse each testing Leno, while Timo Werner, who also appeared from the bench, hit the post at the other end as the Germans held on.