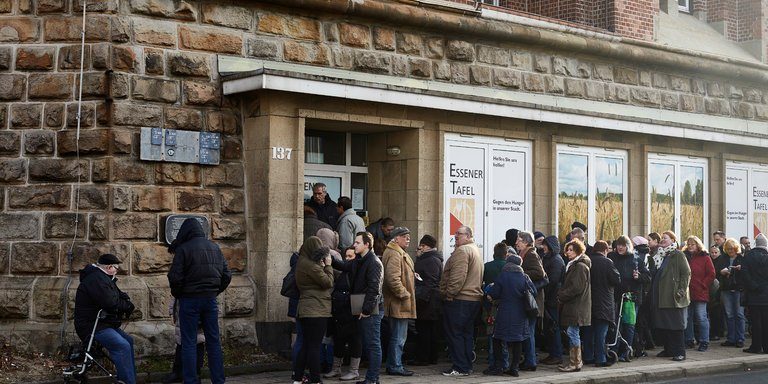 BERLIN — A German food bank is to begin considering non-German applicants again next week, after setting off a national debate on refugees and poverty by deciding to bar any more foreigners from signing up for its service.

The food bank, in the western city of Essen, found itself at the center of a media storm that brought it international media attention, vociferous support from some Germans — reflected in increased donations — and a public rebuke from Chancellor Angela Merkel.

Its case became a talking point in the continued conversation over the country’s decision, three years ago, to welcome more than a million refugees: Jörg Sartor, volunteer director of the food bank, the Essener Tafel, said he had made the initial policy change in part because the proportion of foreigners among the organization’s users had risen over those years to three-quarters of its clients from one-third.

But on Wednesday, Jochen Brühl, the chairman of the national Tafel organization, which oversees a network of 934 food banks, appeared keen to play down both the initial decision and the reversal.

“With all the media attention, Mr. Brühl said, “one should not forget that this decision was temporary from the beginning.”

Mr. Sartor, a retired coal worker, made the initial change when the food bank found itself needing to limit its intake of clients in December, but it became a subject of widespread controversy in February, after being reported in a local newspaper.

The Essen food bank has 120 volunteers and distributes food to nearly 6,000 people. Mr. Sartor estimated that it would turn away about 60 non-German applicants a week while the admissions bar was in place; it continued to serve foreigners who were already on its books.

Critics said such organizations should make decisions based on need, not on nationality, but many Germans applauded the Essen food bank’s approach, arguing that when with regard to social services, poor Germans should come first.

“Racists at the Essener Tafel? As if!” read one headline in the newspaper Bild.

One volunteer resigned over the policy. Protest graffiti appeared on the Essener Tafel’s offices in an old water tower and on the food bank’s trucks. And as the controversy attracted national coverage, Ms. Merkel declared, “You shouldn’t categorize people like this.”

The decision to reopen the pantry to all applicants was taken by representatives of the food bank and the city, and announced on Tuesday. If intake needed to be limited again, the announcement said, priority would be given to older people and families with young children, and would not be determined on the basis of nationality.

“We now have to talk about the fact that the food banks aren’t the problem, poverty is,” Mr. Brühl said.

The Tafel food banks give donated food to people who have trouble making ends meet. To prevent chaotic handouts, they require newcomers to demonstrate proof of need.

In Essen, applicants are seen on Wednesdays and are then assigned a specific weekday on which to pick up food. Non-Germans can start applying again next Wednesday.