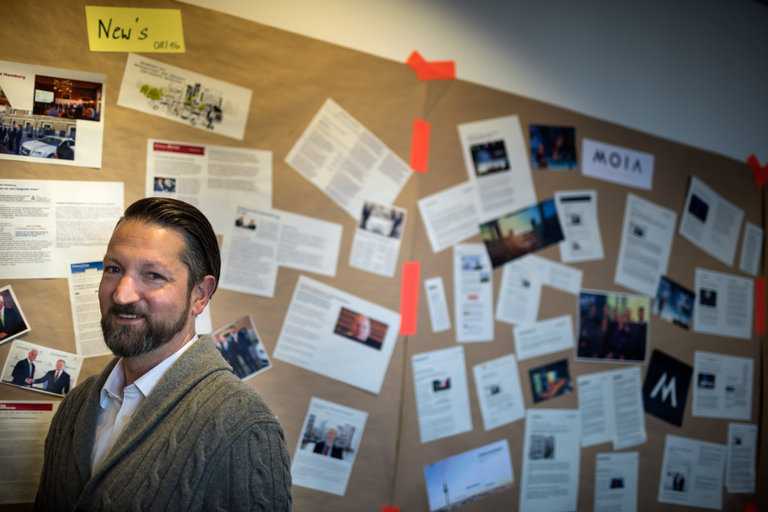 WOLFSBURG, Germany — One of the first things Ole Harms did after taking over Volkswagen’s new ride-hailing start-up was leave town.

Staid Wolfsburg, Volkswagen’s home, was not the best place for the automaker to mount a defense against Silicon Valley challengers keen to upend the car industry, and he needed to move.

“Nobody knows how the world is going to look” in the coming years, said Mr. Harms, a bearded 41-year-old dressed in a gray cardigan over a crisply pressed white shirt. “The biggest skill you have to have is the ability to change.”

So he packed up and took his team to new digs in Berlin, where increasingly urgent attempts to tap into a growing tech scene are part of German carmakers’ efforts to ride a digital wave sweeping the industry — before it rolls straight over them.

WOLFSBURG, Germany — One of the first things Ole Harms did after taking over Volkswagen’s new ride-hailing start-up was leave town.

Staid Wolfsburg, Volkswagen’s home, was not the best place for the automaker to mount a defense against Silicon Valley challengers keen to upend the car industry, and he needed to move.

“Nobody knows how the world is going to look” in the coming years, said Mr. Harms, a bearded 41-year-old dressed in a gray cardigan over a crisply pressed white shirt. “The biggest skill you have to have is the ability to change.”

So he packed up and took his team to new digs in Berlin, where increasingly urgent attempts to tap into a growing tech scene are part of German carmakers’ efforts to ride a digital wave sweeping the industry — before it rolls straight over them.

Autonomous driving, electric cars and ride-hailing apps from Silicon Valley, like Uber, are reshaping transportation. Young people no longer feel as compelled as previous generations to own cars. And Wall Street shows scant respect for automakers and their global manufacturing prowess: The market value of Google, which is building a driverless car, is more than double that of BMW, Daimler and Volkswagen combined.

At stake is the fate of the German economy, Europe’s largest, at a time when the region is only beginning to emerge from a decade-long economic malaise. Germany, in particular, is as dependent on its carmakers as Michigan is on Chrysler, Ford and General Motors.

Industry executives here often cite how Apple’s iPhone quickly erased Nokia’s once-dominant position in the mobile handset market, and they are determined not to let something similar happen to them.

“I am convinced that we are going to see more change in the next 10 or 15 years than we have seen in the last 100 years,” Peter Schwarzenbauer, a member of the BMW management board, said in a telephone interview. “The big question is always, Do we car manufacturers learn to become tech companies more quickly than a tech company learns to be an automotive player?”

Non-German carmakers have readily embraced Silicon Valley through partnerships and investment deals. Fiat Chrysler, for instance, is working with Google on self-driving cars. General Motors has poured $500 million into Lyft, the ride-booking service. And Volvo, the Swedish automaker owned by Geely of China, provided the chassis for Uber’s recent driverless car tests.

That has been backed by many locals, who have so far rebuffed Uber’s aggressive local expansion plans that have often run roughshod over domestic regulation, and by German politicians eager to please some of the country’s biggest employers.

BMW, for example, is working with the chip maker Intel and Mobileye, an Israeli tech company, to develop a self-driving car of its own by early in the next decade. It has also formed a partnership with IBM to use artificial intelligence to allow vehicles to automatically adapt to their owners’ preferences.

To combat the likes of Tesla, the California electric automaker, BMW is planning to expand its i Series line of battery-powered and hybrid vehicles. Since 2014, it has sold 100,000 of the i3 model, which runs on batteries and has a lightweight carbon fiber body.

Daimler, the maker of Mercedes-Benz cars and trucks, has similarly been investing in digital alternatives. Of the three automakers, it has also been the only one so far to become an active partner with Uber, albeit in a limited deal where it provides a set of its autonomous vehicles to the ride service.

Andrew Pinnington, chief executive of MyTaxi, said the automaker’s backing had allowed it to expand rapidly across Europe, where it has often teamed up with local taxi associations to combat the rise of Uber.

“This is a game that requires deep pockets,” Mr. Pinnington said.

The German carmakers’ digital plans have led to increased collaboration between what have long been staunch rivals.

In 2015, BMW, Daimler and Volkswagen’s Audi unit joined forces to buy Here, a digital mapping unit of Nokia, for around $3 billion. While not a household name, the Berlin-based company provides about 80 percent of the built-in navigation systems for cars in North America and Europe, and is the only large-scale competitor to Google Maps.

“The future of Germany as an industrial nation depends on how companies succeed in bringing the manufacturing and digital worlds together,” said Frank Ridder, research leader for Germany, Austria and Switzerland for Gartner, a technology research firm.

Taken together, the carmakers’ digital reboot is aimed at rejuvenating Germany’s vaunted industrial base. About one-fifth of jobs in Germany are in manufacturing, double the portion in the United States.

But factory jobs as a percentage of total employment have been declining for years, prompting the government to dole out hundreds of millions of euros in research and development funds to meld traditional manufacturing with the latest technology.

The initiative, called Industry 4.0, reflects a dawning realization that Germany’s historic success may not necessarily help the country thrive in a smartphone-centric world.

The experience of Volkswagen is a case in point. The company, which is still dealing with its emissions cheating scandal, is the world’s biggest automaker, but was the slowest of the three to embrace the digital age, and is now trying to catch up.

That is where Mr. Harms comes in.

A former consultant at Capgemini, he joined the carmaker in 2008 and is now chief executive of MOIA, a new Volkswagen service that sits somewhere between ride-hailing services and traditional city bus networks.

Unlike Uber, which has often run into resistance from officials in Europe, MOIA plans to cooperate with local governments and act as an extension of existing public transportation networks. Instead of lumbering buses following fixed routes, Mr. Harms said, MOIA shuttles will adjust their destinations and schedules according to customer demand. The vehicles will be electric, and in the future, some may be self-driving.

MOIA has yet to sign any deals, but it is negotiating with cities including Hamburg and Berlin. It hopes to expand quickly into the United States and China. In smaller cities, Mr. Harms said, MOIA could offer an inexpensive form of public transportation, even though rivals like Uber and Didi Chuxing, a Chinese ride-hailing service, are already well established in many of these locations.

“The whole mobility market — transportation as a service — is just at the beginning,” Mr. Harms said.

Volkswagen’s recent push into new digital frontiers has taken on added momentum since Matthias Müller took over as chief executive after the emissions scandal.

Under Mr. Müller, Volkswagen has set a goal of selling at least two million electric cars a year by 2025 as it tries to rebuild its image and reduce its dependence on diesel cars. In June, Volkswagen bought a piece of the ride-hailing business by investing $300 million in Gett, a taxi-hailing service available in cities including New York and London.

But for Mr. Harms, the carmakers’ best hope of survival is if they can prove the value of owning big factories, even though most previous efforts by the industry — and other traditional sectors — to compete with digital upstarts have proved unsuccessful.

“A vehicle is extremely sensitive. You can’t put out a beta version and then two weeks later an update,” he said. “We are the ones who already know how to do it very well.”