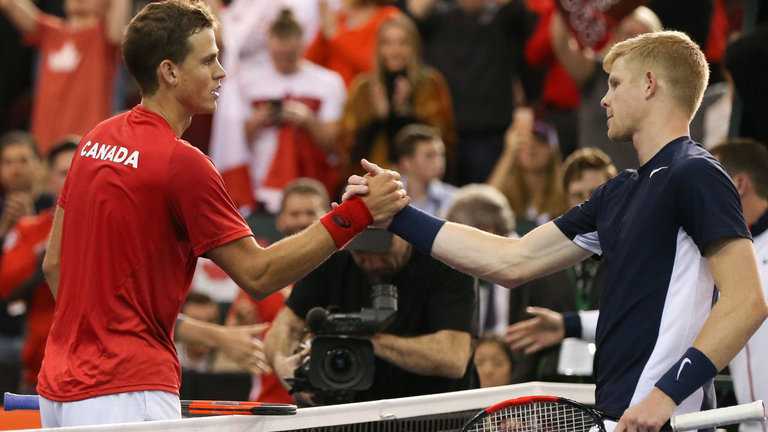 Great Britain will go into Saturday’s Davis Cup doubles clash with Canada all-square, after Dan Evans and Kyle Edmund experienced contrasting fortunes on the opening day of their World Group tie in Ottawa.

Edmund had his serve broken three times during the opening two sets, before offering greater resistance in the third.

The opening 12 games of the set all went with serve – and without a single break point opportunity – but from 2-2 in the tie-break, Edmund lost the next four points with the 26-year-old Pospisil claiming victory on his second match point.

Edmund, 22, did not pull any punches when describing his own performance: “It was just not good enough, pretty dismal from my standards.

“Everyone can accept winning and losing, but it needs to be a lot better at this level.

“I’m just very disappointed for myself, for the team. It’s annoying when you have support like that and fans come out and spend money and travel and to put on a performance like that. You just really want to do well.”

Pospisil, currently ranked 133 in the world, sent down 19 aces to seven by his opponent and will face Evans in Sunday’s reverse singles.

On Saturday, Jamie Murray and Dom Inglot will face 44-year-old doubles specialist Daniel Nestor and Pospisil, with GB skipper Leon Smith expecting a close encounter: “It will be a great atmosphere with Daniel’s 50th tie.

“Obviously Vasek looked like he had a little bit of an injury, but it didn’t stop him too much but it will be interesting to see how he pulls up.

“But Jamie and Dom are a really good team. The court should really suit the way they serve.”