GB in front after doubles win 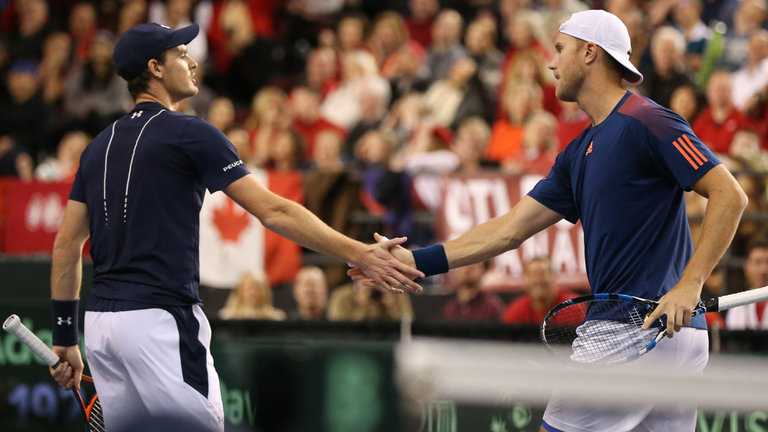 The match featured a quartet of experienced doubles operators and the 44-year-old Nestor received a huge ovation
from the enthusiastic crowd at the TD Place Arena as he lined up for his 50th tie.

Breaks of serve were scant on the fast court and the first set went to a tie-break, which the British duo dominated, reeling off seven points in a row to claim the advantage.

A brilliant lob from Nestor helped Canada claim the first break of serve at the start of the second set, an advantage they held until the eighth game, when the impressive Inglot conjured up a return winner to seal a break-back.

However, Inglot errors and a Murray double-fault set the tone in the second set tie-break and Canada were able to level the match.

The British pair upped their game in set three but squandered three chances to break and a third tie-break was the consequence.

But, as in the first set breaker, Inglot and Murray got off to a great start and did not look back, moving to within one set of victory.

Pospisil had tape on his left knee after receiving treatment to it during his singles win on Friday and he was in trouble on serve in the sixth game of the fourth set.

Having saved two break points, he put a volley into the net on the third, and the Brits went on to close out the rubber, Inglot serving out the match to cap a memorable night for the Londoner.

Murray told the BBC: “As the match went on, we started the points better and made a few returns. And I think they got a bit tired as well.

“The surface was not easy, it was hard on the joints. Vasek played yesterday and Daniel is older than us, so there was no excuse for us not to outlast them.

“We did a great job, we stayed strong in the important moments. It was fine margins.”

Dan Evans is scheduled to face Pospisil in the first match on Sunday and a win for the Brit would clinch the tie, while a victory for the Canadian would set up a decisive fifth rubber between Kyle Edmund and 17-year-old Denis Shapovalov.

The winners of the tie will travel to France for a quarter-final tie in April, after the French wrapped up a 3-0 win over Japan.