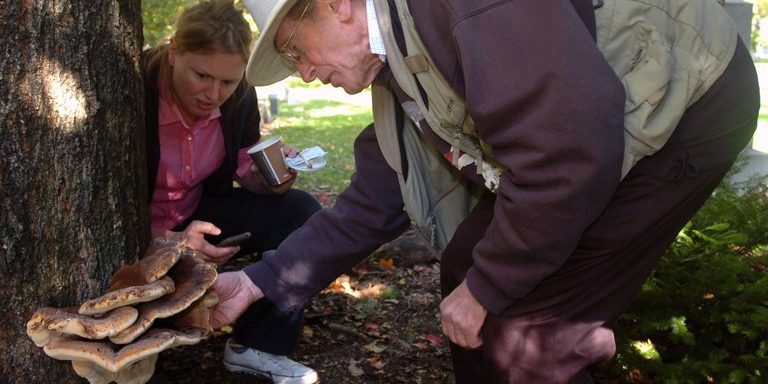 Gary Lincoff, a self-taught mycologist whose contagious enthusiasm turned him into a pied piper of mushrooms, died on March 16 in Manhattan. He was 75.

His family said he died after a stroke.

Mr. Lincoff, a philosophy major and law-school dropout, wrote a field guide to North American mushrooms that sold more than a half-million copies. He led mushroom hunts as far afield as Siberia, India and the Amazon and as near to his home as Central Park, two blocks away, where over the course of decades he counted more than 400 species.

Mr. Lincoff taught for more than 40 years at the New York Botanical Garden in the Bronx and instructed Martha Stewart on dredging puffballs in panko bread crumbs to bring out their flavor. He wrote peer-reviewed journal articles and poems and songs about mushrooms, and helped found the countercultural science and fun fair in Colorado known as the Telluride Mushroom Festival.

He was a fungus fanatic who championed the mushroom as food, medicine, soil decontaminator, psychotropic portal and essential link in the eternal cycle of decay and rebirth.

“Just to name mushrooms — after a while it gets sort of boring,” he told an interviewer in 2015. “To know what these mushrooms are doing, that drives me. That keeps me thinking. Every plant I see, every tree I see, I know that there are mushrooms totally involved in the health of those trees.”

Mr. Lincoff loved exotic fantastical-looking mushrooms with names like violet-branched coral and eyelash cup and bearded tooth and wolf’s-milk slime, and he loved nondescript little brown blots that sprouted on dead sticks. He was often asked which mushroom was his favorite, and he invariably replied, “The one that’s in front of me right now.”

“He inspired literally thousands of people to overcome their fear of fungi,” said Paul Stamets, another member of the tiny cohort of celebrity mycologists. “No matter how dumb your question was, he never humiliated you, he never put you down. He never believed there was such a thing as a stupid question.”

Gary Henry Lincoff was born on Oct. 3, 1942, in Pittsburgh to Leonard Lincoff, an optometrist, and the former Bette Forman. He graduated from the University of Pittsburgh in 1963 with a bachelor’s in philosophy, a passion for Thoreau and an unfulfilled sense of purpose.

He left law school at George Washington University because “he didn’t admire his professors,” his wife, Irene Liberman, said. She met him in 1967, when he was doing graduate work in English literature in Pittsburgh.

In addition to Ms. Liberman, a graphic designer, Mr. Lincoff is survived by their son, Noah, and a younger brother, Bennett.

The couple moved to New York in 1968, and Mr. Lincoff set out to write a novel about a draft dodger who waits out the Vietnam War living in Central Park. In his research he got hung up on a question: What would the protagonist eat?

“I took six months off to learn everything there was to know about survival in the city — wild foodwise,” Mr. Lincoff told The New York Times in 1978. “I began to see that every tree, every weed, wasn’t alike. I got into minutiae.”

He and Ms. Liberman led forays to gather edible plants for suppers of acorn burgers, pokeweed shoots and Juneberry pies. In 1971, the couple went on their first walk with the New York Mycological Society. “I said, ‘Let’s promise not to eat anything,’ and we ate nine wild mushrooms that day,” Ms. Liberman recalled. Mr. Lincoff had found his calling.

He steeped himself in mushroom studies and eventually persuaded the New York Botanical Garden to let him teach despite his lack of formal credentials. In 1978, he published a book on toxic and hallucinogenic mushroom poisoning and was soon recruited to write the National Audubon Society Field Guide to North American Mushrooms, which was published in 1981 and is in its 31st printing. He served for nine years as president of the North American Mycological Association.

(Mr. Lincoff had never tried hallucinogenic mushrooms when he wrote the poisoning book, Ms. Liberman said, but when he finally did, in the 1980s, “He was delighted.” At least once, he found the hallucinogen Gymnopilus junonius, known as “laughing gym,” in his beloved Central Park. “I came out of the park with a big cluster of it and I walked smack into three cops,” he said. “I thought, ‘This is it.’ But they just said, ‘You better be careful if you don’t know those.’ I said, ‘I’m going to take these back and study them.’ ”)

Mr. Lincoff helped found the Telluride Mushroom Festival in 1981. It was conceived by a Denver radiologist and mushroom-lover, Emanuel Salzman, as an alternative to stuffier mycological conferences.

“We had an ‘Edibility Unknown’ party every year that would horrify serious professional mycologists,” said the alternative-medicine guru Dr. Andrew Weil, another festival co-founder. No one ever got sick, Dr. Weil said, though the pioneers discovered that one species tasted like old tires.

Mr. Lincoff was in demand as a tour leader and headed expeditions to more than 30 countries, on every continent except Antarctica. When he was back in New York, he served as lecture coordinator and animating presence of the New York Mycological Society. Three years ago, he decided that unlike other mushroom clubs, the society should hold walks year round.

This past New Year’s Day, with the mercury around 10 degrees, he led a walk in Central Park.

“We walked for two hours and found almost 50 species,” said Vivien Tartter, one of Mr. Lincoff’s many acolytes. Someone found a cluster of Eutypella scoparia — tiny hairlike tufts too small to be seen without a loupe — growing on a twig. “Gary was very excited.”