Garcia holds on to Dubai lead 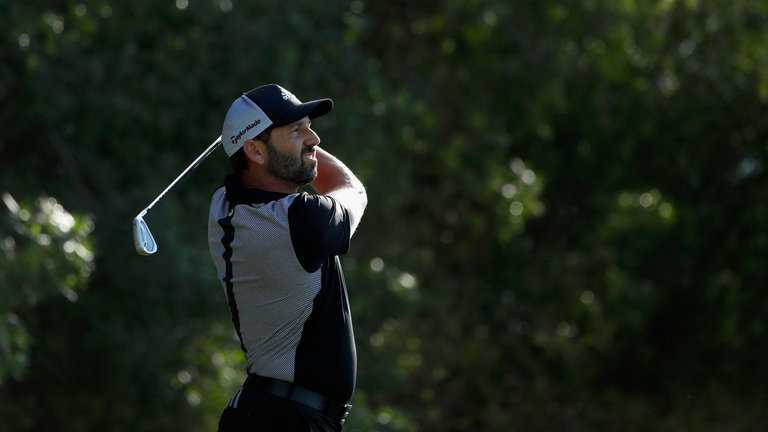 Sergio Garcia maintained his three-shot cushion at the Omega Dubai Desert Classic after finishing his third round in near-darkness on Saturday.

Garcia birdied his final two holes in fading light at Emirates Golf Club to close on four-under 68 and move three ahead of nearest challenger Henrik Stenson.

Beginning three strokes clear after completing a second round 67 early on Saturday morning, Garcia missed a six-footer to save par at the first but bounced back with a birdie-three at the next.

The Spaniard missed birdie chances at the third and fifth and drained a 20-foot par-save at the seventh after almost finding water from the tee.

Overnight leader George Coetzee made successive birdies from the second but lost ground with a bogey-five at the 11th, as Garcia opened with back-to-back gains after the turn to move four ahead.

Tyrrell Hatton moved up the leaderboard by playing a seven-hole stretch in seven under around the turn, but bogeyed the ninth – his final hole – to slip out of the share of second briefly held with Henrik Stenson.

The Swede followed a front-nine 34 with a birdie-three at the 10th and matched Garcia’s gain at the 13th, before rolling in from six feet at the 15th as Garcia three-putted for bogey.

Stenson failed to convert a birdie putt at 16 and missed from close range at the par-four next, where Garcia drove the green and posted a two-putt gain.

As Stenson closed a five-under 67 with a final-hole gain, Garcia elected to lay up in the dark at the last and convert a 10-footer to reclaim his three-stroke cushion.

“We all looked at each other at 17 and decided we want to come here (tomorrow morning) just for two or three shots,” Garcia told Sky Sports. “It got dark very quickly and I didn’t expect it to get that dark so fast, but I guess it proved to be the right thing!”

Ian Poulter birdied three of his final four holes to join Prom Meesawat in a share of third, with Coetzee and Peter Uihlein on 10 under.

A round-of-the-day 65 from Tyrrell Hatton leaves him a further stroke back with Raphael Jacquelin, Chris Paisley and Nacho Elvira – who eagled the 18th in the dark.