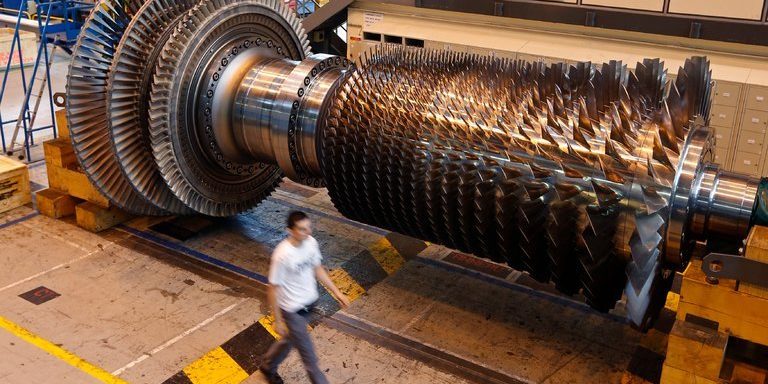 General Electric reported a first-quarter loss on Friday, but there were also signs that the struggling industrial giant is beginning to stabilize its business.

G.E.’s big power-generator division continues to drag down the company’s overall performance, and it is still hampered by financial liabilities that linger from the conglomerate’s pared-back finance arm, GE Capital.

But a number of G.E.’s industrial divisions delivered solid results in the quarter including aviation, health care, renewable energy and transportation. That should provide some assurance to investors as the company charts a future more dependent on its industrial lines.

G.E. reported a net loss of $1.18 billion for the quarter. But the loss was mainly related to a charge of $1.5 billion for liabilities in a subprime lender, WMC Mortgage, which it once owned and is part of a federal investigation.

Without that one-time charge, the company’s operating earnings per share rose 14 percent, to 16 cents a share, or 5 cents above the average estimate of analysts polled by Thomson Reuters.

Total revenue in the quarter rose 7 percent to nearly $28.7 billion, ahead of analysts expectations, helped by the contribution from the merger of G.E.’s oil-field equipment business with Baker Hughes last July. G.E. owns a majority stake in the combined company.

But G.E.’s revenue from its industrial operations, excluding acquisitions and currency swings, fell 4 percent, to $23.8 billion.

In its jet engine business, revenue rose 7 percent, to $7.11 billion, and operating profits rose 26 percent to $1.60 billion. It is not yet clear whether the Southwest Airlines accident this week, caused by an engine made by CFM International, a joint venture between General Electric and France’s Safran, and which killed one passenger, may have any effect on the company’s aviation business.

G.E.’s power turbine business remains weak, with revenue down 9 percent, to $7.22 billion, and orders down 29 percent.

Investors and industry analysts have been looking for evidence that G.E.. is beginning to turn around. Mr. Flannery has been wrestling with a series of setbacks since he became chief executive last August.

Last fall, he surprised investors by telling them G.E.’s big power-generation business – long a pillar of strength for the company – was reeling. The division had badly misjudged the market, producing too many power turbines as global demand for electricity generation softened.

Mr. Flannery warned the that it might take a year or two to fix the power business, prompting G.E. to cut its dividend for only the second time since the Great Depression.

Then, in January, G.E. delivered two more jolts. The company announced it would take a big charge and set aside $15 billion over seven years to pay for obligations held by GE Capital, mainly on long-term care insurance policies. G.E. had been paring back its once-huge finance arm for years, and its liabilities were thought to be few, and known.

The Securities and Exchange Commission is investigating the company’s handling of its insurance obligations and how it accounted for multiyear industrial services contracts.