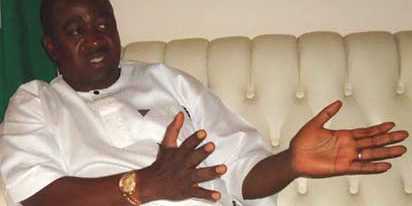 The invaders also slaughtered over 22 persons whose corpses, Vanguard gathered were still trapped in the farms at Anyii and Ayilamo where the fleeing locals believe the mercenaries have set up their camps.
Governor Suswam who, yesterday led Journalists, the Benue State Police Commissioner, Mr. Adams Audu and a team of Police officers

and men on an assessment tour of his village and neigbouring communities was physically moved when he saw that his entire village had been sacked and deserted.

It was discovered that from Anyii, Suswam’s ancestral home to Ayilamo, a stretch of about 25 kilometers, all the inhabitants of the close to 29 villages had been sacked by the rampaging herdsmen who struck less than 24 hours before the governor’s visit.

It was also discovered that all of the governor’s kinsmen, extended family members, elders, women and children have been sacked from their ancestral homes by the marauders, leaving the entire village deserted.

One of the fleeing locals who gave his name as James Terzungwe, told Vanguard that the invaders came to their communities from  neigbouring  Nasarawa state.

“They came from  Nasarawa state after crossing River Benue and stormed our communities in their hundreds, when people were already in the farms. That was why many of the people were killed because they were caught up in the farms where it was very difficulty for them to escape or jointly defend themselves.

“That attack left over 22 of our people dead, those are the ones we have seen, many are still missing and nobody knows about their condition because we gathered that so many corpse are still in the farms and bushes near the river, but no one can go near there for now because the Fulanis have completely taken over those areas.” he said.

While addressing the displaced persons who came out of their hiding at Ayilamo, Governor Gabriel Suswam urged them to be security conscious, and assured them that the state government was partnering the federal government to ensure that the crisis was brought to an end.

The governor also promised to establish displaced persons camps in parts of the state to cater for the Internally Displaced Person, IDPs, in areas affected by the crisis.