Fulani herdsmen kill 25 in Benue.They ‘re terrorists in disguise— Suswam 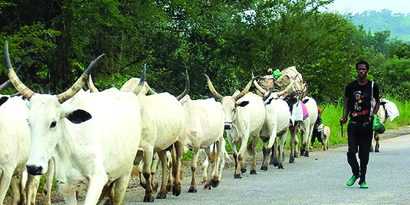 NO fewer than 25 persons were feared dead yesterday in Kwande, Katsina-Ala and Logo local government areas of Benue State after suspected Fulani herdsmen sacked six villages in the three councils. They also burnt down farmlands, houses and huts.

Vanguard gathered that the invaders, who had in the last few weeks attacked the southern part of the state, moved up north and were said to be heading towards the country home of Governor Gabriel Suswam in Logo and that of the former Minister of Steel, Wantaregh Unongo in Jato Aka.

According to a source, “18 people were said to have been killed at Tse Ibor, Tombo and Mbawa all in Logo Local Government Area, while

another seven were said to have been killed at Anyiase near Kashimbila in Kwande Local Government Area.”

At press time, it was gathered that fighting was still raging in the affected communities while several houses were said to be on fire in the villages.
Reacting to the fresh crisis, Governor Gabriel Suswam said: “As am talking to you right now, terrorists masquerade as Fulani herdsmen and use cow as cover to attack Logo, Katsina-Ala and Kwande local government areas.

“The way these attacks are being carried out is like we are being encircled in the state. But despite this provocation, I have continued to plead with the people to be calm.
“Nobody is allowed to take the law into his hands. I believe the Federal Government is also not resting over the matter.”

Meantime, three suspected soldiers who were said to be fighting on the side of the Fulani mercenaries were yesterday evening nabbed by the youths in Moon District of Kwande Local Government.
The trio, who were badly injured, were handed over to the Police Commissioner who in turn brought them to Governor Suswam, who directed that they should be given proper medical attention pending the completion of investigation into the matter.