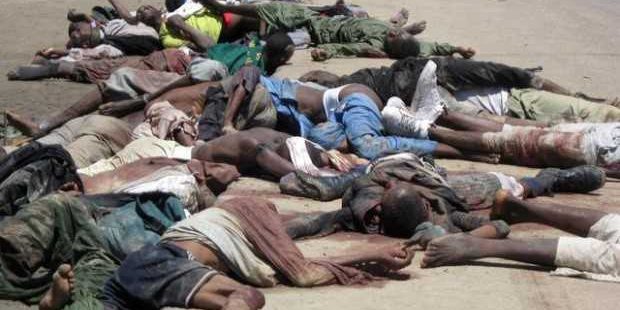 No fewer than 22 people were killed yesterday in a fresh attack by some Fulani herdsmen in Plateau State.

This was even as some Boko Haram terrorists on Wednesday night invaded Askira, the Headquarters of Askira-Uba Local Government Area of Borno State and killed three people.

The Plateau attack was carried out by the herdsmen at Mavo village in Wase Local Government Area of the state The local government was inhabited by the Taroh ethnic nationality.

An eyewitness said over 10 houses were razed by the gunmen during the attack, which also left several people injured Our correspondent learnt that the killing created tension in the community as youths stormed the street to protest the incident, but were repelled by security operatives

A youth, who gave his name as Nangak, told journalists that the attackers came to the village in their hundreds and started shooting sporadically

The Interim Administrator of Wase Local Government Area, Zakari Haruna, who spoke to journalists on phone, confirmed the attack, but added that normalcy had returned to the community.

He declined to comment on number of persons killed, but he confirmed that many houses were razed Also, the Police Public Relations Officer in Plateau State, Felicia Aslem, confirmed the attack, but added that she had not been fully briefed of those killed. In Borno State, the gunmen invaded Askira and killed three people.

It was also learnt that two policemen were injured during the attack. Some residents, who did not want their names mentioned, told our correspondent that the gunmen came in Hilux vehicles and motorcycles.

The residents added that the attackers wore military uniforms and opened fire on the people, as well as destroyed security posts with Improvised Explosive Devices (IEDs). They said the attackers perpetrated the violence for over three hours, killing many innocent people with the burning of shops, houses and vehicles before they fled into bush.

But the Borno State Commissioner of Police, Mr. Lawal Tanko, described the incident as an armed robbery attack. Tanko said the gunmen attacked a restaurant and carted away some amount of money before they shot three people, including a policeman.

He said: “At about 7.0pm on Wednesday, some armed robbers riding on motorcycles with Ak47 rifles stormed a beer palour owned by one Igbo Mr. Chukwu Celestine and robbed him of about N150,000.

“The gunmen also robbed another trader of about N65, 000 before shooting three people, including a policeman suspected to be among the customers relaxing at the beer palour. “There was no arrest made as the gunmen fled before my people were deployed to the scene.”