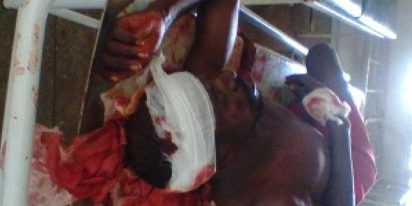 Jalingo—No fewer than twenty persons have been feared dead and scores of others injured when Fulani herdsmen allegedly invaded Tunari village in Wukari Local Government of Taraba State yesterday. The attackers were said to have stormed the village at 10 am and set houses ablaze while most residents were in church.

Speaking to Vanguard on the crisis, the President of the Youth of Vision, Wukari, Mr Tsa-asen L. Agbu said the invaders, who were over three hundred, attacked mainly the Jukun Christians, a situation which he said has compelled a lot of persons to relocate from the area.
According to him “they are burning down houses and killing our Jukun Christian brothers. They slaughtered children and women like rams. As I am talking to you right now, over twenty people have been killed, with several others sustaining various degrees of injuries while several houses have been burnt.”
Another eyewitness told Vanguard that “the attackers operated for several hours killing and burning down houses without any trace of security men to come to our rescue.”
According to the eyewitness, “these people took us unawares, and I believe they came from the nearby Plateau State. I think the level of damage would have been worse but for the fact that many of our people have gone to church.”
A pastor of one of the churches, said the death toll was “more than twenty” and that most of the victims were women and children who according to him “were attacked on their way to their various churches.
The Police Public Relation Officer, PPRO, Joseph Kwaji, who confirmed the incident was however unable to provide the casualty figure saying authentic figures were yet to be made available to the command.
According to him “Tunari village in Wukari Local Government was attacked this morning by the Fulani people, but our men have been drafted there to restore peace”.
Source vanguard