Fueled by Bribes, Somalia’s Election Seen as Milestone of Corruption 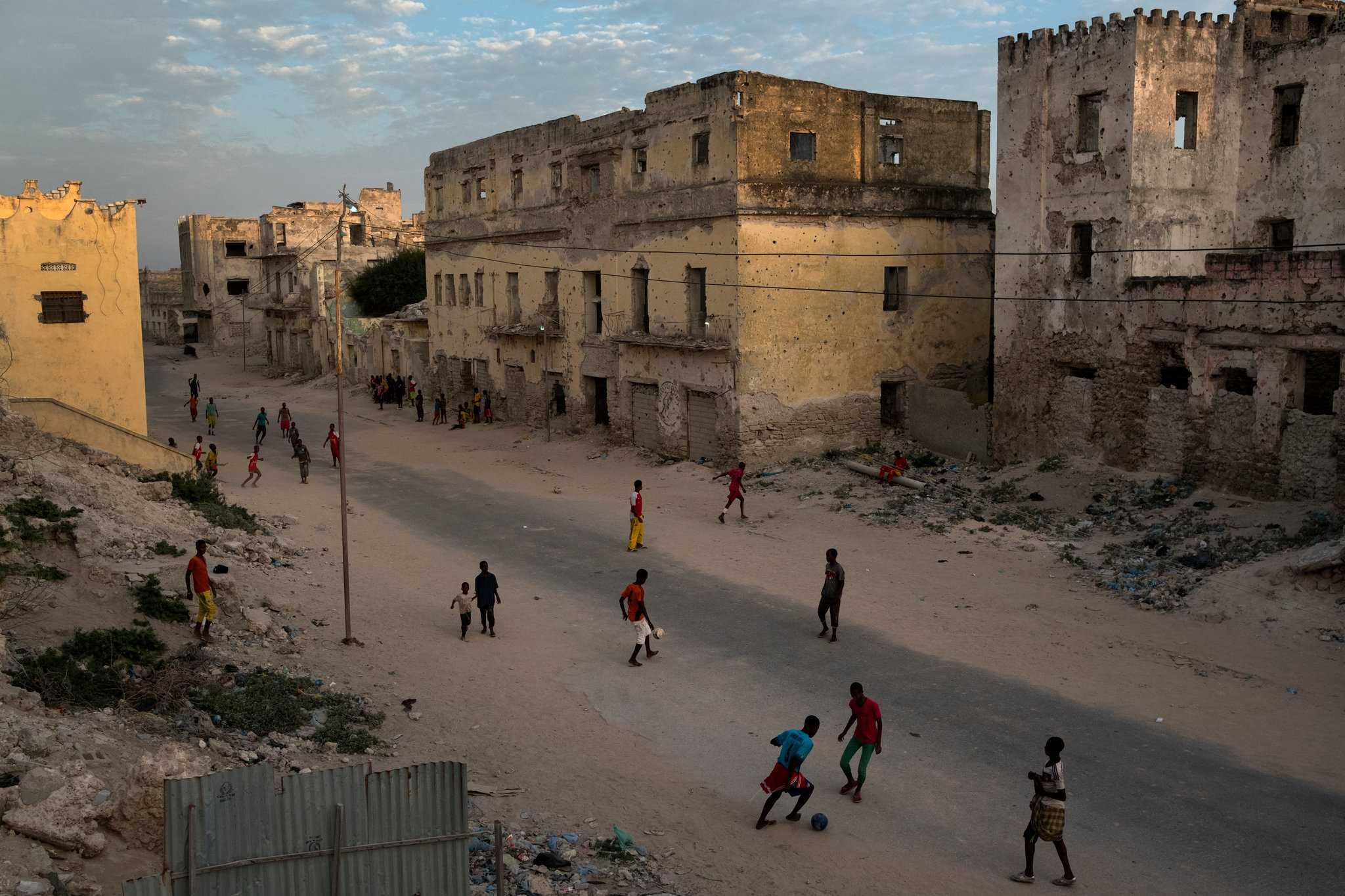 In the bowels of the city, people agree. The slogans on the election billboards — “Justice,” “Peace,” “Development,” “We Are All Brothers” — make them laugh.

“The president’s a hyena,” said Mohamed Said Mohamed, a fish seller by the crumbled seashore.

Food is a big worry right now. Somalia is headed into a drought, which could lead to a famine this spring.

Western diplomats said they had designed a kind of airport security check that all the Parliament members would have to go through on their way to vote. The important focus now was to make sure that no one could bring mobile phones into the voting booth.

The suspicion is that if the lawmakers can sneak a photograph of their vote, they can sell it for even more money.

MOGADISHU, Somalia — Politicians have been peeling off wads of hundred dollar bills to buy votes. Others have shown up for parliamentary races standing next to a political nobody who was bribed or coerced into running against them, to make the race look fair. In one case, the mysterious candidate was the politician’s maid.

This week, Somalia, which has languished without a functioning central government for more than 25 years and has been propped up by billions of dollars of American aid, is holding an innovative, closely watched presidential election that United Nations officials have billed as a “milestone.”

But several analysts, investigators and some Western diplomats say the election has turned out to be a milestone of corruption, one of the most fraudulent political events in Somalia’s history — and that’s saying something, given that the country is already ranked by Transparency International, a global anticorruption organization, as the most corrupt on earth.

Somali investigators estimate that at least $20 million has feverishly changed hands during parliamentary elections that will culminate in the selection of the president on Wednesday.

Outside forces like Turkey, Sudan, the United Arab Emirates and Qatar are widely believed to have been buying off presidential candidates to land juicy business deals, spread a harsh version of Islam or spy on American forces.

The entire process has been so bad, several analysts said, that the Shabab militant group, one of the deadliest Islamist organizations in the world, isn’t even trying to derail the vote because the corruption free-for-all almost makes the militants look upstanding by comparison.

“This election has been awesome for the Shabab,” said Mohamed Mubarak, who runs a Somali anti-corruption organization, Marqaati, which means “witness.” “The government loses even more legitimacy and the Shabab has a chance to buy a seat!”

For decades, the world has poured more blood and treasure into Somalia than practically anywhere else outside of Iraq or Afghanistan. Somalia’s political dysfunction has caused epic suffering and death, and its problems tend not to respect its borders.

The United States recently beefed up its military presence here, seeing Somalia as a grave security threat. Warlords starve their own people, driving hundreds of thousands of Somalis into neighboring countries and overseas. The Shabab has slaughtered hundreds of innocents, including Westerners, across East Africa. And who can forget Somalia’s 21st-century pirates, who hijacked global trade with a bunch of scruffy skiffs?

But American, European and African military officers say that firepower alone won’t solve these problems. The only answer, they say, is for Somalia’s government to get its act together and provide an alternative to chaos.

Even before this election was marred by staggering corruption, patience was wearing thin. Now, with President Trump pushing an “America First” message, many aid workers and diplomats who have spent years trying to help fix Somalia worry that it could be in Mr. Trump’s cross hairs.

He has already made Somalia one of the seven countries under his travel ban, and some fear that he could slash aid. Many Somali experts believe that would only destabilize the country further, fueling the chaos that has made Somalia a global terrorism threat. And aid workers say this would be an especially difficult time to cut funds for Somalia because the country could be headed into another famine.

Somalia has lurched from crisis to crisis since 1991, when the central government disintegrated, clan-based warlords tore the country apart and a famine broke out.

Since then, various combinations of warlords, technocrats and Islamists have been recognized as the official government despite not ruling much territory, delivering any services or keeping the country safe.

The Shabab continues to be an unstoppable menace. In late January, in the span of three days, Shabab fighters detonated two large bombs in Mogadishu and killed dozens of Kenyan peacekeepers several hundred miles away.

“The Somali government has no authority, no popular support, no monopoly on violence,” said Abdirahman Abdishakur Warsame, a former minister of planning now running for president. “It’s a fake state.”

A few years ago, Somalia’s major backers — the United States, Britain, the European Union, Sweden and Italy — considered a plan to hold one-person, one-vote elections. Several Western diplomats said they felt pressure from home governments to show that after so much money had been invested, Somalia was making progress.

But the Shabab threat made it difficult to hold popular elections in many parts of the country, so the Western backers supported a more-limited voting process based on Somalia’s traditional clans.

While nearly all Somalis share the same language, culture and ethnicity, Somali society is split into a dizzying number of lineage-based clans, sub-clans, sub-sub-clans and sub-sub-sub-clans. Those clan divisions have become officially recognized political units, almost like congressional districts.

Corrupt clan-based elections are nothing new here. According to several researchers, when President Hassan Sheikh Mohamud was selected in 2012, many of the clan elders were given a $5,000 bribe to choose the clan’s representative in Parliament.

But this time, instead of clan elders’ picking all the representatives, Western diplomats pushed for a wider, more inclusive process in which the 275 members of the lower house of Parliament would be selected by clan caucuses of 51 delegates per caucus.

Western diplomats said they thought that having 51 votes instead of one for each seat would make bribery harder.

They now say they were wrong.

The new election system spawned “corruption inflation,” said Abdirazak Fartaag, a former Somali government official. He said that every stage was crooked and that some Parliament seats had gone for more than $1 million each.

“The international community was determined to have an election at all costs, and that’s what this has become,” he said. “It’s really pathetic.”

In the last four months, the clans have finished their caucuses. Both the lower house and a new senate, whose representatives were selected somewhat differently, have been sworn in.

But more than 10 Somali elders said in interviews that they had paid or received bribes. They said they could be killed for revealing how the process really worked.

One elder in Kismayo, a forlorn port town in southern Somalia, said that the night before his clan was to select a Parliament member, one of the candidates stopped by the hotel where the delegates were staying and started handing out stacks of hundred dollar bills. The candidate told the delegates they would each get $3,000 for their votes and the money was widely believed to have come from a presidential candidate who had made a secret deal with the parliamentary candidate that if he won his race then he would vote for the presidential aspirant at the final stage of the election process.

The cash, the elder said, was passed hand-to-hand.

“Everybody knows this is wrong,” the elder said. “But you can’t refuse. If you do, the clan won’t trust you, and then maybe you have problem.”

When asked what kind of problem, he said, “Personal security problem.”

Another elder said that in a tight race for a Parliament seat in Mogadishu, the 51-member delegation was split, 25 to 25, with one swing vote undecided. The elder admitted to offering $10,000 to the holdout.

He explained how important it is to have political protection in a place like Mogadishu. He said that if you have a real estate dispute or one of your relatives is arbitrarily arrested — both happen all the time in this city — it helps immensely to be able to call on a friendly member of Parliament to intervene.

Several elders seemed amused by the advent of what they call “bride” candidates — because they follow the other candidates around so that they appear to have an opponent. In one race in southern Somalia, elders said, the clan representatives were so fed up with the leading candidate, who had been trying to buy his way into office, that the neophyte follower actually won the race.

‘The President’s a Hyena’

More than 20 presidential hopefuls are running. Analysts contend that President Mohamud has a good chance of keeping his office because he has received millions of dollars from Turkey and the United Arab Emirates to buy enough votes from the Parliament members who will vote for a new president. Turkey, the analysts said, has invested millions in Mogadishu’s port and airport. Mr. Mohamud declined to comment.

It might seem strange that Somalia, one of the poorest, most neglected countries in the world, would be such a hotbed of geopolitics.

But according to diplomats, the Emirates and Qatar are backing different candidates here in a rivalry over the Muslim Brotherhood, while Egypt and Ethiopia are supporting different candidates because of their duel over the Nile. And Sudan is supporting certain political figures to keep its access to Somali intelligence services, which also work with the C.I.A. That way, analysts said, Sudan could spy on what the Americans in Somalia were doing.

Michael Keating, the head of the United Nations’ mission to Somalia, argues that maybe Somalia’s election, which was mostly funded by Western donors, shouldn’t be judged by the same standards as an election in a stable nation.

He said that although corruption was “clearly a big problem,” this election process was more legitimate than previous ones, producing more female representatives and some clan reconciliation.

Still, he added: “We’re not going around saying it was fantastic. It wasn’t.”

In the bowels of the city, people agree. The slogans on the election billboards — “Justice,” “Peace,” “Development,” “We Are All Brothers” — make them laugh.

“The president’s a hyena,” said Mohamed Said Mohamed, a fish seller by the crumbled seashore. “These guys are taking bribes of $100,000 when most of us can’t afford a plate of spaghetti.”

Food is a big worry right now. Somalia is headed into a drought, which could lead to a famine this spring.

Western diplomats said they had designed a kind of airport security check that all the Parliament members would have to go through on their way to vote. The important focus now was to make sure that no one could bring mobile phones into the voting booth.

The suspicion is that if the lawmakers can sneak a photograph of their vote, they can sell it for even more money.