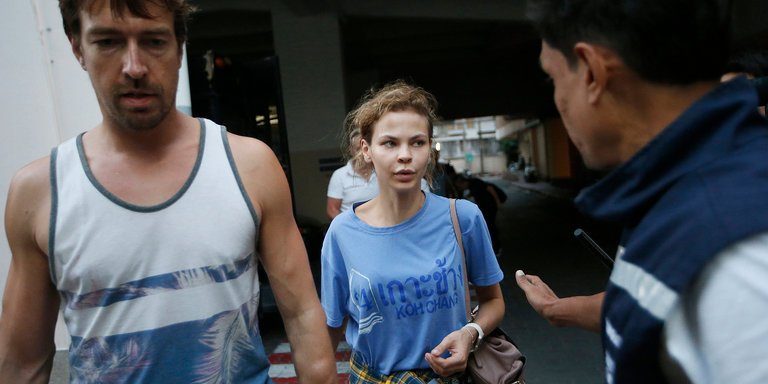 PATTAYA, Thailand — A pair of self-described sex instructors from Belarus have been stuck in a Thai detention center for weeks. They say they have evidence demonstrating Russian interference in the 2016 presidential campaign in the United States, and that they have offered it to the F.B.I. in exchange for a guarantee of their safety.

Their claim — that they are targets of a covert Russian operation to silence them because they know too much — might seem outlandish, but their case certainly includes some unusual circumstances.

They have influential enemies in Russia. They were arrested with the help of a “foreign spy,” according to the Thai police, and locked up on what is a fairly minor offense: working without a permit. And the F.B.I. says it tried to talk to the pair, suggesting that American investigators had not dismissed their account out of hand.

“They know we have more information,” one of the pair, Alexander Kirillov, 38, told The New York Times last month in an unauthorized phone call from the detention center in Bangkok. Mr. Kirillov said his co-defendant, Anastasia Vashukevich, 27, had angered some powerful people. “They know she knows a lot,” he said. “And that’s why they made this case against us.”

Ms. Vashukevich certainly knows how to get attention. In February, a top critic of Russia’s president, Vladimir V. Putin, released a video that included footage she recorded during a brief affair she had with a Russian aluminum tycoon while working as an escort aboard his yacht in 2016. The evidence included photos she posted of the tycoon and his guest, Sergei E. Prikhodko, a deputy prime minister, and recorded them talking about relations between the United States and Russia.

The escort and her seduction coach have been held largely incommunicado since March 5, when reporters for The Times and other news media outlets were kicked out of the detention center for speaking to them. They now face deportation and fear what might happen to them if they are sent home to Russia, where they live, or Belarus, the former Soviet republic where they grew up, which remains firmly within Russia’s influence. (Mr. Kirillov was traveling on a Russian passport.)

Neither of them is accustomed to silence. They and their circle of friends say they make a habit of recording everything they do as they go about their campaign of teaching seduction techniques and trying their skills on strangers, sometimes in public.

The two were arrested along with eight others on Feb. 25 when dozens of plainclothes police officers raided a workshop they were conducting for Russian tourists at a hotel in Pattaya, about 70 miles south of Bangkok.

The seminar was aimed mainly at male Russian tourists and offered instruction in how to seduce women. It was not illegal.

The police arrest report says that a “foreign spy” infiltrated the Russian-language seminar and provided the Royal Thai Police with information about the training.

Cellphone messages exchanged by the police show that the agent signaled the waiting officers when to raid the Ibis Pattaya Hotel conference room.

The work permit charge is relatively minor, and Mr. Kirillov had been conducting training sessions in Pattaya for years. But high-level officials appeared to take an unusual interest in this case: Six police generals and two colonels had responsibility for the raid, according to the arrest report.

Since the arrests, the government has tried to keep a tight lid on information. Friends said they had not been allowed to visit Ms. Vashukevich and Mr. Kirillov for weeks.

A law enforcement official said the F.B.I. tried to speak with the two but was not successful.

A Thai police spokesman, Lt. Col. Krissana Pattanacharoen, would not comment on whether Russia was behind the arrests, but he said it was not unusual for the police to use foreign operatives.

“Investigations are not one size fits all,” he said. “It depends entirely on the situation.”

Few other police officials have been willing to talk about the case. The American Embassy in Bangkok declined to comment. The Russian Embassy asked that questions be submitted in writing but did not answer them.

After the pair’s arrest, Mr. Kirillov sent a handwritten letter to the American Embassy in Bangkok asking for asylum for all 10 detainees. (At the time, Heather Nauert, a State Department spokeswoman, dismissed the case as “a pretty bizarre story” and indicated that the embassy had no plans to talk with them.)

Financial records show that companies controlled by Mr. Manafort owed millions of dollars to Mr. Deripaska, the aluminum tycoon. During the 2016 race, Mr. Manafort offered to give him private briefings about the campaign, though there is no indication that the tycoon took him up on the offer.

Ms. Vashukevich, who goes by the name Nastya Rybka online and recounts her story in a book, “Who Wants to Seduce a Billionaire,” became an escort under the guidance of Mr. Kirillov, better known as Alex Lesley, who has gained popularity in Russia for his advocacy of sexual freedom.

At the time of the yacht visit, Ms. Vashukevich had shaved six years off her age to pose as 19. She was sent by a Moscow modeling agency to a yacht off Norway along with six other escorts, according to her account.

She said she followed Mr. Kirillov’s instruction to record all her interactions with her target, the yacht’s owner, who turned out to be Mr. Deripaska.

Ms. Vashukevich told The Times in a brief interview last month at the detention center that she had more than 16 hours of recordings from the yacht, including conversations with three visitors who she believes were Americans.

She has called herself the “missing link” in the Russia investigation.

Her posts from 2016 came to prominence only after Aleksei A. Navalny, a Russian opposition leader, included them in a video in early February that made accusations about official corruption. Mr. Navalny also charged that Mr. Deripaska had delivered Mr. Manafort’s campaign reports to the Kremlin.

Before traveling to Thailand, Mr. Kirillov grew worried about repercussions from the exposé and asked a childhood friend, Eliot Cooper, to contact United States authorities on his behalf, Mr. Cooper said.

Mr. Cooper, who lives in Canada, said in a telephone interview that he called an F.B.I. hotline in February and proposed trading the recordings for the pair’s safety.

He said he had told the hotline agent about one recorded conversation in which Mr. Deripaska and Mr. Prikhodko discussed wanting Mr. Trump to win.

“I explained all of that to the F.B.I.,” he said. “They should have a transcript of everything and a recording of my voice.”

Mr. Cooper said he had never heard back from the agency. The F.B.I. declined to comment.

Mr. Cooper said that Mr. Kirillov had hidden copies and instructed associates to release them if he or Ms. Vashukevich were killed or went missing.

“There is no investigation,” Mr. Cooper said. “The Americans are not interested. They want them to disappear, and Nastya in particular, because she is a living witness.”

By the standards of Pattaya, a city notorious for its adult entertainment, the sex seminar for about 30 Russian tourists was tame.

A hotel spokeswoman, Joyce Ong, said the workshop was run like a “normal corporate seminar,” and she denied earlier reports that the staff had called the police.

None of those arrested were charged with sexual misconduct. Ms. Vashukevich was both Mr. Kirillov’s star pupil and one of the instructors at the seminars.

The chief of Thailand’s Immigration Bureau, Suttipong Wongpin, said his department had restricted the Belarusians’ visitors because letting them talk freely could harm Thailand’s relations with the United States and Russia.

“The detainees,” he said, “will just say whatever they want.”