From Nigerians in Tanzanian prison, a desperate cry for help 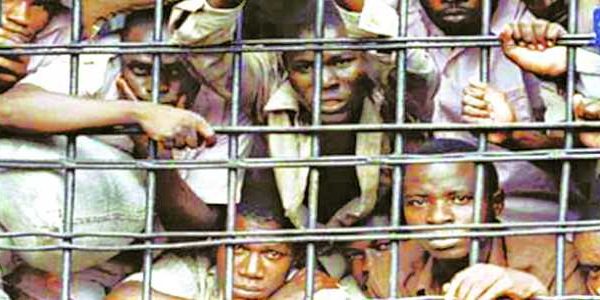 Having spent up to three years in detention awaiting trial over alleged involvement in criminal activities,

and unsure of whether they would ever be taken to court, Nigerians in Tanzania beg President Jonathan to intervene in their case. MOSES AKAIGWE reports

For years, they have been incarcerated in a foreign land, with no help coming their way. No fewer than 30 Nigerians who have been in detention in Tanzania for about three years without trial have cried out to the Federal Government to save them from dying in foreign land.

The Nigerians are passionately calling on President Goodluck Jonathan to intervene in their case and ensure that justice is served.

Alleging starvation, torture and lack of basic provisions, the Nigerians said they were arrested at different times between 2010 and 2012 for sundry offences, including drug trafficking, but are yet to be arraigned “due to lack of evidence and corruption” on the side of the Tanzanian law enforcement officials.

The Nigerians are being held in Keko Remand Prison, said to be notorious for its lack of basic amenities and congestion, which sometimes result in health problems and avoidable deaths.

The save-our-soul message was conveyed through a phone call from the prison in Dar es Salaam, Tanzania’s major port city, to the reporter recently by the detainees who claimed that the Nigerian High Commission in the country has not lived up to its consular responsibility to them. They said the mission has been very insensitive to their plight.

The detainees, who spoke in hushed tones through one of them named Chris, said those arrested for drug related crimes had their documents, personal belongings and the substances in their possession, pilfered and sold by the Tanzanian drug enforcement agents for personal gains.

The result, Chris told the reporter, is that without exhibits and other incriminating pieces of evidence, the various cases involving the Nigerians have consistently been stalled for years as the officials do not have anything to work with in court.

The Nigerians also disclosed that the Tanzanian authorities have been blaming their inability to take their cases to court on lack of funds, a claim corroborated on phone by a Nigerian High Commission source in that country.

The telephone interview with the detainee lasted for some minutes at a particular time each day for about three different days, apparently because he was using an unauthorized set which he seemed to have limited access to.

Here is his story: “In my own case, I was arrested in March, 2012. They took everything I had on me, including money, the day they arrested me and there is no trace of them now. More than a year and half after, they keep telling me that they are still investigating. The other Nigerian whose voice you are hearing, was arrested a year before me. There are many other Nigerians that were here before I was arrested, but nobody has been taken to court. They keep telling us that investigations are still going on.

“No court appearance, no medicine, no feeding, no water. We are dying gradually. The cell itself is like hell. Ordinarily, this cell where I am calling you from, is not supposed to accommodate more than 16 people, but there are about 50 black foreigners packed here like in the days of slave trade.

“There was a day the inmates decided to protest the inhuman condition in the prison, especially lack of water, and the result was that we were locked up and severely beaten. The water (supply) was cut and the protesters began to faint after the third day of the protest. Yet, nothing has changed. Even when we informed the Nigerian embassy, they did not protest.”

Curiously, each time they hear the Nigerians bemoan their fate, the same drug law enforcement officers and warders responsible for their condition remind them that it is an irony that they are citizens of an influential country like Nigeria, and have a particular powerful prophet (names withheld)) noted for performing miracles at home, and yet are suffering in a foreign land.

Chris went on: “One of the top officers of the anti-drug trafficking police here told us that he had visited the prophet’s church in Lagos, and that the man is a powerful man of God who can help set us free using his spiritual powers. That is why we are praying that President Jonathan and this prophet should hear about our case. We were told that if the man of God reads about our case in the newspaper, he will pray for us to be released.”

The prison inmates alleged that despite many efforts to get assistance from the Nigerian High Commission, all the help they have so far received was in form a visit to their cells in March, 2013, during which they were given “mere toiletries”.

Asked how he got the telephone number of the reporter, Chris who claims he hails from Imo State, disclosed that he copied the number from a copy of Daily Sun allegedly smuggled into the cell for the inmates by some unknown people.

Contacted on phone, a top official of the Nigerian High Commission in Tanzania, who did not want his name mentioned, because, according to him, he did not have the mandate to comment on the matter, confirmed that the mission had been aware that some Nigerian are being held in Keko Remand Prison. He, however, blamed the inmates for being victims of their own greed.

He said that upon receiving information that about 13 Nigerians were being detained in the prison, the mission visited them with provisions. “We have been in touch with them. It should not be made to look like we don’t know what to do. We know what we should do, and we have been doing it. We are on top of the situation,” the official told the reporter.

Apart from contacting the families of some of them in Nigeria, the source said the High Commission also took the matter to the relevant authorities in Tanzania, including the office of the Director of Public Prosecution (DPP), where it was learnt, as the Nigerian inmates had earlier claimed, that there was no money to prosecute the cases.

He disclosed that even beyond the normal diplomatic channels, the mission had at different times reached out to some of the host agencies handling the cases, arguing, however, that there were limitations. “We cannot perform magic, but we are not sleeping on the matter,” the official added.

He further disclosed that before the cases were brought to the knowledge of the High Commission, some of the Nigerians had already spent about two years in the prison, while the only lady involved refused to cooperate with the mission’s officials. He said the lady might have refused to cooperate with the mission’s officials, like some of her colleagues, because she did not want to face the shame of her identity being exposed.

Dismissing the argument that if the Federal Government had intervened through the Foreign Affairs Ministry, the Nigerians would have received justice by now, the source stated: “It is not true. These are serious cases. It was their greed that landed them in this situation. They were desperate. When I visited them, I prayed for them, but it was their fault.

“Last year, a young Nigerian died in his hotel room in this country as a result of swallowing wraps of hard drugs which later burst in his stomach. We were contacted. So, some of these cases are as a result of their being desperate and that makes our work difficult.”

With the Tanzanian authorities insisting they don’t have money to prosecute the cases, some of which have been stalled for as long as three years, what is the way out, the official was asked.

“That is the point now, and we are strategizing on that,” he said. “The state says it has no money to hire judicial officials. If you don’t have money, why not deport the Nigerians you are detaining?”

Reacting to the claim by the High Commission’s source that the officials had been discharging their responsibilities properly, and were on top of the situation, Chris and his colleagues insisted that enough had not been done by Nigeria’s representatives in the country to ensure that the detainees get justice.

He retorted: “People from other embassies come here every week to see their citizens, but people at our own embassy don’t care. Even the warders and police officers here tell us that not enough has been done by our country to get justice for us. The truth is that it is not just lack of money that is keeping us here. They don’t have evidence against us. That is why they can’t take us to court. When they arrest you, they take all your documents, your money and sell the exhibit. And, if they don’t have money to send us to court and they don’t have proof, why still keep us in prison? Justice delayed is justice denied.”

Insisting on his accusation of “insensitivity and incompetence” against the Nigeria mission in Tanzania, Chris added: “If they had come out boldly to demand justice or even hired lawyers on our behalf, by now all the cases would have been settled. Those people are not serious. They are arrogant. As if they did us a big favour, they keep reminding us that they came here with provisions. But, what they actually brought were pomade and one or two other things.”

Despite repeated request sent to the High Commission by the reporter for the High Commissioner’s comments, the mission refused to react officially to the detainees’ plight. Rather, it was gathered that the officials contacted the Nigerians in the prison and berated them for reporting the situation to the press back home, maintaining that diplomatic matters were not resolved through publications in foreign media.