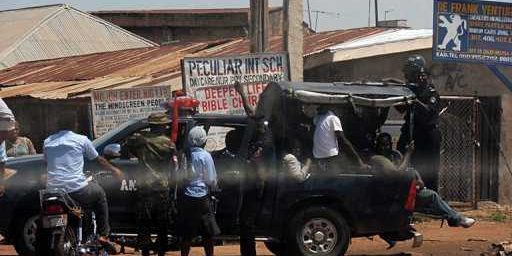 THE Peoples Democratic Party (PDP) in Oyo State has charged the ruling Action Congress of Nigeria (ACN) and the Accord Party not to turn the state into a war zone following Thursday’s mayhem allegedly perpetrated by supporters of the parties in coalition with members of the National Union of Road Transport Workers (NURTW), at Olomi area of Ibadan.

The PDP, in a press statement signed by its Public Relations Officer (PRO), Mr Kehinde Salawu, alleged that Thursday’s crisis at Olomi was spearheaded by the ACN-led members of the NURTW and their opposite numbers within the Accord Party, thus punctuating the relative peace hitherto being enjoyed by the citizens of the state.

While urging well-meaning members of the society to warn the leadership of the Oyo ACN and Accord Party to allow peace to reign, the PDP specifically called on the Inspector General of Police, Mr. Mohammed Abubakar, to call the parties to order, in the overall interest of the populace.

According to the PDP, it had forewarned the Senator Isiaq Abiola Ajimobi-led ACN administration on the implications of its various moves to run an insensitive government, particularly the usage of the NURTW to perpetrate troubles against the perceived opposition across the state.

However, the chairman of the NURTW in the state, Alhaji Taofeek Oyerinde, denied the involvement of members of the union in the clash, insisting that members of his union were not politicians, even as he said the state officers were busy with the inauguration of Akinyele Heavy Truck Branch of the union that Thursday and could not have been involved in the fracas.

Oyerinde, while speaking with journalists on Saturday, expressed disappointment with the report linking his union with the clash.

He added that it was while the inauguration was in progress that some thugs invaded the union secretariat and started shooting sporadically and in the process two staff of the union; Kehinde Adeyemo and Tirimisyu Ajibade sustained gunshot wounds and are currently receiving treatment at a private hospital.

The chairman explained that members of the public went away with the wrong impression that the union members were involved because of the closeness of the venue of the fracas to its secretariat.

The Oyo PDP further noted with concern that at the time it was warning Ajimobi, the ex-Governor Rashidi Ladoja-led Accord Party was busy negotiating for positions in the Ajimobi administration, turning deaf ears to the warning, until now that the ill-motivated alliance between them collapsed like pack of cards.

The PDP also described as ‘a fake and stage-managed show’ the Accord Party rally in which it claimed to be receiving defecting members from the opposition parties, saying it was only aimed at hoodwinking the populace. The party enjoined the people of the state to ‘shine their eyes’ as developments continue to unfold in the polity.