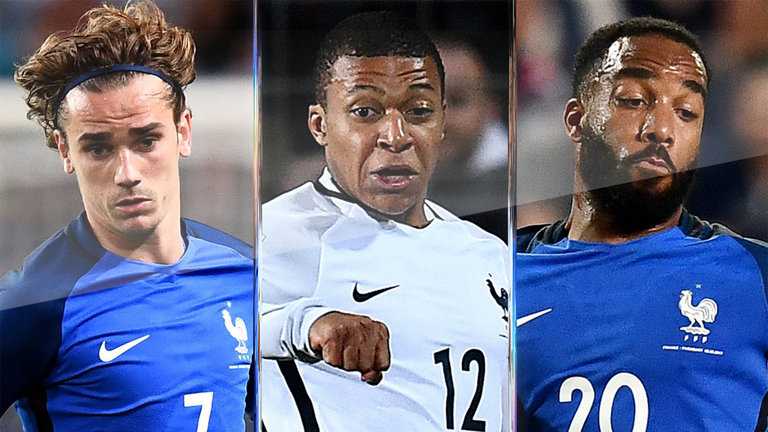 France face England in an international friendly at the Stade de France on Tuesday evening, boasting a plethora of attacking options.

Olivier Giroud scored a sensational goal against Sweden on Friday but there are three other forwards in the France squad attracting interest from Premier League clubs.

We take a look at why the trio are in demand…

Strengths? Brilliant in front of goal with a wonderful left foot, Griezmann can dart in behind defences but is equally comfortable dropping deep to help link the play too. He is a versatile player and at 26, the Atletico Madrid forward is also at the peak of his powers.

What’s he done? Griezmann has hit the 20-goal mark in each of his past four seasons and is now scoring consistently at European level. Major titles have eluded him thus far having tasted disappointment in the finals of the Champions League and Euro 2016.

Where could he go? Manchester United were thought to be preparing a bid earlier this summer but interest faded with Atletico’s transfer ban complicating matters. The France international has suggested he is committed to the club but he remains much sought after.

Strengths? Mbappe has pace in abundance and the trickery to match. What’s more, he has impressed everyone by displaying an unusual coolness in front of goal that belies his tender years. After all, the Monaco forward only turned 18 in December.

What’s he done? Mbappe scored 26 goals for Monaco in the 2016/17 season, helping the club to the Ligue 1 title. He was also a Champions League sensation, becoming the first player ever to score in his first four knockout appearances in the competition.

Where could he go? The list of teams after Mbappe signature is a who’s who of Europe’s biggest clubs. Both the Manchester sides are keen, while Arsenal have been linked with a bid. Real Madrid are flexing their muscles too but Monaco hope to keep him. For now.

Strengths? Lacazette has pace and strength but is also technically strong and a top-class finisher. The Lyon forward has experience of playing all across the forward line and having just turned 26, he is still entitled to feel his best years are ahead of him.

What’s he done? Lacazette has long been regarded as one of Europe’s best goalscorers – outscoring Zlatan Ibrahimovic in the 2014/15 Ligue 1 campaign – and only added to his reputation last season with a best-ever tally of 37 goals in all club competitions.

Where could he go? There is long-standing interest from the Premier League but Atletico Madrid appeared to have won the race for his signature prior to their transfer ban. Could the confusion open the way for Lacazette to make the move to England?