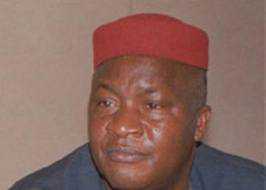 Following the released list of Interim Officers of the yet-to-be-registered All Progressives Congress, APC, indications are clear that the camp of the former Governor of Imo State, Chief Achike Udenwa, within the ACN has lost out completely in the composition of the Party’s National Executive Council NEC.

Information available to us has it that no member of the Imo State Chapter of Action Congress of Nigeria, ACN, made the list of the interim Exco of the merged political parties, instead the All Progressive Grand Alliance, APGA, and the Democratic Peoples Party, DPP, produced one person each.

From APGA came Senator, Osita Izunaso who emerged as the National Organizing Secretary and Sir Romanus Egbunike, known as “Sir White” who is the interim Deputy National Welfare Officer.

With the latest development, Dr Achike Udenwa has been left to carry the can, as none of his prodigees nor himself picked any office, even though it is for the interim.

It was shocking to the Udenwa’s Camp as the likes of Hon Uche Onyeagocha were expected to have been given something, at least to give the camp a sense of belonging.

The Governor Okorocha’s camp of the APGA were lucky to have clinched the office of the National Deputy Chairman, South-East, in the person of Senator Annie Okonkwo, and Senator Izunaso who was Okorocha’s nominee.

Sources close to the former Imo Governor, Chief Achike Udenwa said that the Amaifeke, Orlu born politician is now considering the option of returning back to his old political party, the PDP, as he has been schemed out in APC.

Despite the fact the positions are for the interim, yet Udenwa sees it as a slight and a vote of no confidence on himself and his Group, by the APC hierarchy, and may retrace his steps before it becomes too late.

Everybody expected that Udenwa would have been the Interim Chairman of APC. Now, imagine where neither him nor any body from his camp was considered fit enough for any position, even at interim bases.