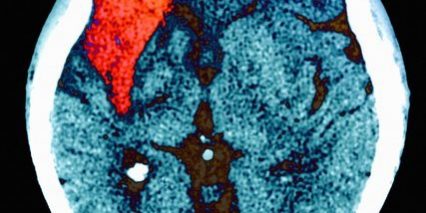 It was one of those findings that would change medicine, Dr. Christopher Lewandowski thought.

For years, doctors had tried — and failed — to find a treatment that would preserve the brains of stroke patients. The task was beginning to seem hopeless: Once a clot blocked a blood vessel supplying the brain, its cells quickly began to die. Patients and their families could only pray that the damage would not be too extensive.

But then a large federal clinical trial proved that a so-called clot-buster drug, tissue plasminogen activator (T.P.A.), could prevent brain injury after a stroke by opening up the blocked vessel. Dr. Lewandowski, an emergency medicine physician at Henry Ford Health System in Detroit and the trial’s principal investigator, was ecstatic.

“We felt the data was so strong we didn’t have to explain it” in the published report, he said.

He was wrong. That groundbreaking clinical trial concluded 22 years ago, yet Dr. Lewandowski and others are still trying to explain the data to a powerful contingent of doubters.

The skeptics teach medical students that T.P.A.is dangerous, causing brain hemorrhages, and that the studies that found a benefit were deeply flawed. Better to just let a stroke run its course, they say.

It’s a perspective with real-world consequences. Close to 700,000 patients have strokes caused by blood clots each year and could be helped by T.P.A. Yet up to 30 percent of stroke victims who arrive at hospitals on time and are perfect candidates for the clot-buster do not receive it.

The result: paralysis and muscle weakness; impaired cognition, speech or vision; emotional and behavioral dysfunction; and many other permanent neurological injuries.

Stroke treatment guidelines issued by the American Heart Association and the American Stroke Association strongly endorse T.P.A. for patients after they’ve been properly evaluated. But treatment must start within three hours (in some cases, four-and-a-half hours) of the stroke’s onset, and the sooner, the better.

A number of medical societies also endorse the treatment as highly effective in reducing disability. The drug can cause or exacerbate cerebral hemorrhage, or bleeding in the brain — a real risk. But in most stroke patients it prevents brain injury, and in any event, rates of cerebral hemorrhage have declined as doctors have gained experience over the years.

Without treatment, “many patients end up permanently disabled,” said Dr. Gregg C. Fonarow, a cardiologist at the University of California, Los Angeles. “The stroke neurologists who are involved in chronic care see the devastating consequences.”

“For some reason, the emergency medicine doctors are not factoring this in,” he added.

While the vocal disbelievers are a minority, it is increasingly easy for them to spread their message on social media, said Dr. Edward C. Jauch, a professor of neurosciences at the Medical University of South Carolina.

“The way information and opinion is now communicated to the younger generation of physicians is much more through web and social media and less through peer review journals, journal clubs or live debates,” Dr. Jauch said.

Dr. Charles R. Wira III, a professor of emergency medicine at Yale, said that when he talked to residents about T.P.A., they often start citing blogs and podcasts “as the divine word for why T.P.A. is harmful,” he said. “They have not read the articles or practice guidelines.”

Skepticism has spread around the world, Dr. Jauch said, and he has come to expect naysayers wherever he goes. In Saudi Arabia, where he was lecturing at a conference, a Saudi doctor said over dinner that he simply did not believe in T.P.A.

A leader of the skeptical contingent, Dr. Jerome Hoffman, an emergency medicine specialist and emeritus professor at U.C.L.A., believes that while the initial trial and a second one were positive, both were flawed.

He reviewed the raw data from the federal study and concluded that more patients who got T.P.A. had the least severe type of stroke and fewer had the most severe type. The treatment and control groups were dissimilar — that is, those getting T.P.A. were less badly affected from the start. Experts disagree with this analysis.

And 11 other studies did not show a benefit, Dr. Hoffman claims. But supporters note that those studies were meant to investigate whether T.P.A. might help patients with more severe strokes or those outside the recommended window of time.

The failure of those efforts, they say, does not mean T.P.A. cannot help patients like those in the original clinical trials.

A charismatic, riveting speaker, Dr. Hoffman has given educational courses across the country and sold informational tapes expounding his theory. And his influence has spread.

At U.C.L.A., he said in an interview, he has spoken to stroke patients and their families even as their medical teams headed into the emergency room. He has told the patients that although the stroke team would strongly recommend T.P.A., there actually was debate over whether the treatment benefits patients in the long term.

In addition, no study suggested that a clot-buster was lifesaving, he told them, and it may cause bleeding in the brain in a small number of patients.

“In my experience, almost no one — after hearing a neutral version and then a positive version — chose T.P.A.,” Dr. Hoffman said.

Dr. Hoffman said he has debated renowned neurologists about the benefits of T.P.A. at several meetings. Afterward, audiences voted overwhelmingly against the drug.

“This is not a testament to any debating skill of mine, but reflects how people react when they are shown the actual evidence,” he said.

At Sierra Vista Regional Medical Center in San Luis Obispo, Calif., Dr. Scott Bisheff, an emergency medical physician, tells patients there is great uncertainty about whether T.P.A. helps or harms. If it caused bleeding in a patient’s brain, the consequences could be catastrophic.

About half of his stroke patients decline the treatment, Dr. Bisheff said.

For neurologists, the worst scenario by far is the patient who is never even asked if he or she wants the clot-buster. At Yale, Dr. Wira said, patients sometimes are transferred from community hospitals where they have not received T.P.A. Usually, it’s far too late to try.

Dr. Wira and other staff do not tell the family about the missed opportunity. “We try not to raise issues that may lead to litigation,” he said.

But sometimes family members cannot help knowing what went on. It happened to Dr. Lewandowski.

About a decade ago, Dr. Lewandowski was at work when he got a call that his father had had a stroke — his right side was paralyzed. But his father had gotten to the hospital within 45 minutes, well inside the window to receive T.P.A.

Dr. Lewandowski told his mother to make the family’s wishes very clear. They wanted the emergency room doctor to give the clot-buster to his dad. The doctor refused.

“He told my mom that he doesn’t believe in the drug and he is not giving it. He doesn’t care who I am,” Dr. Lewandowski said.

“I got in my car and drove 400 miles to the hospital,” he recalled. But by the time he got there, it was too late. The treatment window had closed.

His father had a facial droop and slurred speech. His right arm and right leg flopped about uselessly. His stroke scale was 7, moderately disabling, but he survived for a few more years.

“It was very difficult for me personally,” Dr. Lewandowski recalled. “I had spent so much of my professional life working on this treatment. It actually worked.”

A version of this article appears in print on March 27, 2018, on Page D1 of the New York edition with the headline: A Stroke Treatment Mired in Controversy. Order Reprints| Today's Paper|Subscribe