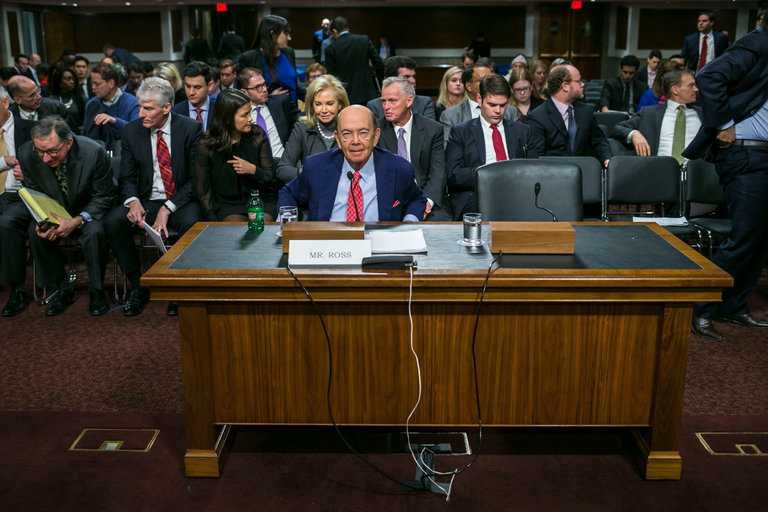 MEXICO CITY — With a panel of senators questioning him, the billionaire investor Wilbur L. Ross stayed on message: If confirmed as President Trump’s commerce secretary, he would protect American workers and tear up bad trade deals that harmed American industry.

And yet, for more than a decade, those same trade deals helped Mr. Ross amass a fortune across the globe — in countries like Mexico and China, among others. In fact, Mr. Ross has sometimes invested overseas in ways that Mr. Trump condemns.

As the head of an auto parts company, Mr. Ross shipped jobs to Mexico, taking advantage of the North American Free Trade Agreement, which he now says is unfair and must be renegotiated. That company, along with a textile firm he founded, publicly stated that Mexico was central to their growth.

To some of his former associates, that history clangs against the persistent message of Mr. Trump, who has called Nafta “the single worst trade deal ever approved in this country” and has excoriated American businesses for sending jobs overseas.

MEXICO CITY — With a panel of senators questioning him, the billionaire investor Wilbur L. Ross stayed on message: If confirmed as President Trump’s commerce secretary, he would protect American workers and tear up bad trade deals that harmed American industry.

And yet, for more than a decade, those same trade deals helped Mr. Ross amass a fortune across the globe — in countries like Mexico and China, among others. In fact, Mr. Ross has sometimes invested overseas in ways that Mr. Trump condemns.

As the head of an auto parts company, Mr. Ross shipped jobs to Mexico, taking advantage of the North American Free Trade Agreement, which he now says is unfair and must be renegotiated. That company, along with a textile firm he founded, publicly stated that Mexico was central to their growth.

To some of his former associates, that history clangs against the persistent message of Mr. Trump, who has called Nafta “the single worst trade deal ever approved in this country” and has excoriated American businesses for sending jobs overseas.

But a spokesman for Mr. Ross described his experience as an asset, not a contradiction.

“As a private businessman, Mr. Ross made pragmatic decisions based on the rules of the road at the time , and it is precisely his knowledge of how trade deals work that will allow him to be successful in renegotiating bad deals like Nafta,” said the spokesman, James Rockas.

The Senate is scheduled to vote on Mr. Ross’s confirmation on Monday.

Mr. Ross’s flexible approach to trade is characteristic of many private equity barons focused on the bottom line, his former associates say. After taking over two bankrupt American textile makers more than a decade ago, for instance, Mr. Ross paid a visit to an executive of J. C. Penney Company.

The industry was in turmoil, and Mr. Ross needed advice. Fellow mill owners, largely concentrated in the American Southeast, were blaming free trade for destroying their livelihoods. Many felt that sending jobs overseas, even for survival, was tantamount to treason.

But for Mr. Ross, who made his name fixing bankrupt companies across a variety of American industries, hiring workers abroad made sense, former associates say. So Mr. Ross inquired about opening a mill with hundreds of workers — not in the United States, but in Vietnam.

“He struck me as very practical about trade,” recounted Peter McGrath, the former head of product development for J. C. Penney, who offered Mr. Ross advice. “He was on a different part of the curve than a lot of his competitors.”

Just over a year later, in 2006, Mr. Ross announced plans to open an $80 million state-of-the-art cotton plant in Vietnam that would employ 1,500 workers. It was one of many business decisions Mr. Ross made over the years that seemed to depart from Mr. Trump’s stance against free-trade deals and the migration of jobs overseas.

“I don’t think he is a devious person,” Jock Nash, a retired lobbyist for Milliken & Company, a textile manufacturer, said of Mr. Ross. “Anybody that knows how to make money is opportunistic — and they have to be to make money.”

Having been tapped by Mr. Trump to lead the charge on America’s worldwide trade relationships, Mr. Ross, 79, has adapted once more. In his new role, if confirmed, he will be tasked with increasing American exports to help create jobs in America. First and foremost, he told members of Congress, he would focus on Nafta.

“We cannot afford trade that is inherently bad for American workers and for American businesses,” Mr. Ross said during his testimony.

His measured comments have taken a back seat to Mr. Trump’s more vocal broadsides against the auto industry for its investments in Mexico, often via Twitter. Mr. Ross has argued that investment in Mexico hurts American economic growth, bolstering the Mexican economy while reducing investment in the United States.

But Mr. Ross has made extensive investments in the auto industry south of the American border. His entry into Mexico began in 2007, a year after he began buying up the global assets of struggling American auto parts makers. He combined them into International Automotive Components, a supplier of auto interiors with factories around the world, including in Mexico and China. Sales in 2015 reached $5.9 billion.

Nearly a decade ago, when his company announced the purchase of a plant in Hermosillo, Mexico, adding $300 million in sales and 1,700 employees to its payroll, Mr. Ross said the deal “demonstrates our commitment to expansion in low-cost countries.”

Eight years later, just before Mr. Trump began his presidential campaign, the company inaugurated a brand new plant, its eighth operation in Mexico. By then, Mr. Ross’s company had completed expansions at three other plants in Mexico. The future there looked bright: His company cited a forecast that Mexico would account for 25 percent of the world’s growth in auto production.

Mr. Ross acknowledged in the hearing that he had moved “a couple of hundred” jobs to Mexico, saying an automaker had demanded the shift.

But he began transferring work to Mexico in the early days of his business. When Mr. Ross acquired an auto parts factory in Carlisle, Pa., a decade ago, he took a hard line with the union, demanding cuts in wages and benefits worth between a quarter and 30 percent of workers’ earnings, according to Doug Carey, who was the president of Local 1739 of Unite-Here, which represented many of the workers.

When the union rejected the demand, Mr. Ross shut the plant down, moving the work to North Carolina, Canada and Mexico, Mr. Carey said.

“Wilbur Ross — there’s no way he cares about the worker,” said Stacey Foltz, who worked at the plant for 10 years. “He made billions of dollars taking jobs out of the country.”

In other cases, even when a plant stayed open, Mr. Ross transferred production to Mexico.

In 2007, after Mr. Ross acquired 11 plants from Lear Corporation that were represented by the United Automobile Workers, their bargaining committees flew to Detroit to meet him.

Over lunch, they said, they listened to his pitch for turning the company around, which involved cuts to their salaries and benefits.

“All the U.A.W. plants gave concessions,” said Richie Franklin, the bargaining chairman for Local 2999 in Strasburg, Va. “It was a tough pill to swallow.”

Though grateful to Mr. Ross for turning the company around, Mr. Franklin was frustrated to see jobs vanish. Two years after the workers agreed to the cuts, Mr. Ross’s company moved the production of consoles for General Motors trucks to Mexico, leaving 110 people out of work.

“They just did it, and there was nothing we could do,” Mr. Franklin said.

In the world of textiles, Mr. Ross used a playbook developed over years. He scoured for companies in distress. Before long, he purchased two textile makers in North Carolina: Cone Mills and Burlington Mills.

At the time, the industry was in upheaval. Textile and clothing manufacturers were bleeding money and jobs. Cheaper wages in Asia brought a surge of imports that helped wipe out nearly three-quarters of the industry, experts say.

Finding a way forward for Mr. Ross’s company, the International Textile Group, would require cheap labor in Mexico and elsewhere.

“I think he was one who recognized that Burlington wouldn’t survive without that kind of diversification of production,” said Patrick Conway, an economics professor at the University of North Carolina, Chapel Hill. “It is the same juxtaposition you would see with Trump hiring foreign workers for his casinos while talking about building a wall.”

“It is a compartmentalization of the businessman’s mind,” he added.

Mr. Ross began lobbying for another trade deal, one that would essentially incorporate Central America into a free-trade zone like Nafta. According to people familiar with the negotiations, he became one of the biggest proponents of the Central American Free Trade Agreement, or Cafta.

He became a mediator of sorts between textile makers like himself and retailers like Walmart and J. C. Penney, whose priority was giving consumers low prices, not using American fabrics.

While Cafta has failed to prevent an onslaught of Chinese imported goods, Mexico remains a crucial element of the company Mr. Ross built.

One-third of the International Textile Group’s revenue is generated by two factories in Mexico, and in its 2015 annual report, published when Mr. Ross was still in charge, the company was clear where the future lay — not in the United States, but in Mexico and China.

“I.T.G.’s long-term focus includes realizing the benefits of its global expansion, including reaching full production at the company’s facilities in China,” the company said in its report.

As for Mexico, the report stated that because the company was a “resident, diversified textile product manufacturer in Mexico,” it “believes that Nafta is generally advantageous.”

For all the choices Mr. Ross made to open factories abroad or lay people off domestically, most who knew him during that era say he was not a heartless Wall Street tycoon. He kept jobs where he could in the United States, including in Greensboro, N.C., where the company maintains a denim mill.

Bruce Raynor, a former union leader in the textile and auto parts industries, said Mr. Ross was not anti-union, as many of his Wall Street contemporaries were. Over the years, Mr. Raynor sat across the table from Mr. Ross on numerous occasions, whether negotiating contracts for textile workers or for auto parts workers.

“It was a low bar to be a decent guy, but as a distressed investor, you buy things that are not doing well,” said Mr. Raynor, who now runs a consulting business. “By definition, if you represent workers, and this is a company in trouble, it’s not like those transactions are fun.”

“Wilbur was always very decent to work with,” he added. “You can’t say that about too many of these guys.”

Perhaps most telling, he said, was the investment Mr. Ross made in the Amalgamated Bank, a nearly 100-year-old institution founded by the nation’s unions. In the depths of the financial crisis, Mr. Raynor asked Mr. Ross for a bailout.

Having worked with Mr. Ross for years, he asked whether the businessman would be interested in making an investment of $50 million, the largest the bank would allow.

After months of due diligence, the deal went through, Mr. Raynor said, which he believes was a testament to Mr. Ross’s decency — not greed. He said Mr. Ross could have made more lucrative investments, but opted instead to help the unions.

“‘I want to make money, but I’m not under any illusions and I’m not in a hurry,’” he said Mr. Ross had told him.