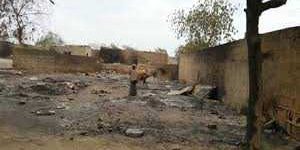 At least five people were reportedly killed yesterday while about 20 others were injured in a fresh attack on residents of Goron-Dutshe in the troubled Birnin- Gwari Local Government Area of Kaduna State.

A resident reported that about 20 people were injured while some houses razed by gunmen at the weekend.

National Mirror leant that many residents who escaped the attack are taking refuge at the Emir of Birnin Gwari palace.

One of the victims, who did not want his name mentioned, said: “God helped us but others have died. They came in large numbers and started shooting in the air first before killing people. How I escaped only God knows. I went there for a visit, I am based in Kaduna,” he narrated.

Kaduna State Police Commissioner, Olufemi Adenaike, told National Mirror on telephone that he would brief journalists today over the issue; “I will brief the press on Monday because I want all to be included. Thank you.”

It will be recalled that villagers of Dogon Dawa in the same Birnin Gwari Local Government Area faced similar attack last year when at least 27 residents were killed even as banks and police station were destroyed in another bloody attack four months ago.